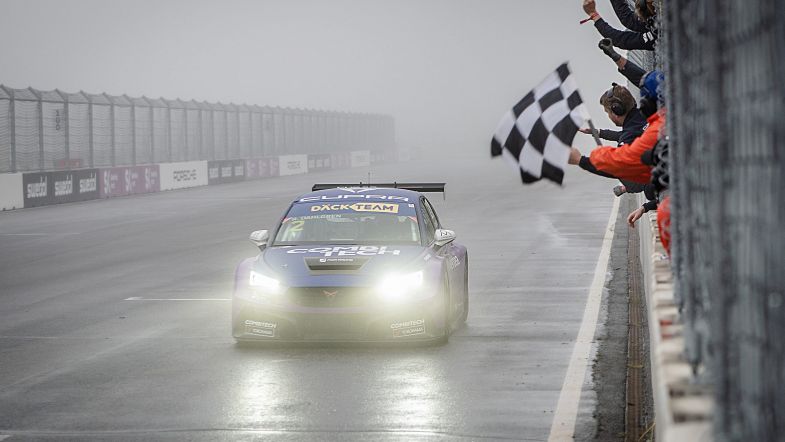 PWR Racing’s Robert Dahlgren has been excluded from the opening STCC TCR Scandinavia race at Skellefteå in June, following a review from the Swedish Motorsport Federation’s disciplinary hearing.

The three-time champion’s Cupra León Competición had failed the ride height check after the race, but Dahlgren escaped punishment after it was argued that a damaged splitter was to blame.

A protest from the Lestrup Racing Team, which runs new race one winner Andreas Bäckman, lodged a protest which was subsequently investigated by the SBF Disciplinary Committee.

In their decision, the SBF Committee explained that no evidence of splitter damage had been found on Dahlgren’s car, and that the points leader had indeed failed the post-race technical check.

“After reviewing the received material, the committee has found that there are no reports of incidents during the heat involving a car,” the decision read.

“The scratches that are visible on the splitter cannot have caused it to be too low, as these should instead lift it up. Therefore, the committee decides to approve the appeal, as it is found that the car is too low during the technical post-check. The affected party shall therefore be disqualified in Race 1 according to rule 2.16.10 and the results list will be changed accordingly.”

The SBD Disciplinary Committee also ruled that Hugo Nerman’s original 20-penalty for jumping the start of race one has been upheld, meaning that Bäckman inherits the victory, with Lestrup team-mate Oliver Söderström promoted to second.

Nerman had won on the road in Skellefteå, but was penalised for moving before the lights went out. Despite accepting that he had “moved a bit” before the start, the stewards upheld a protest from the Brink Motorsport team and Nerman was reinstated as winner.

But a further investigation has reversed the appeal to the original punishment, leaving Nerman fifth in the race after Dahlgren’s exclusion.

“The board has read through the documents received and then also considered the statement of the presiding judge,” the SBF explained.

“Undoubtedly, starting number 69’s car moves when it is under the start[ers] command, which according to the rules is not allowed.

“After discussion, the board has decided to approve the appeal with reference to the above-mentioned rules.”

In the points standings, Dahlgren remains at the top of the drivers’ table, but just 27 points clear of MA:GP’s Mattias Andersson, who tied on 141 points with Söderström and Tobias Brink. Bäckman, after his victory, is just one point adrift of the trio in fifth.