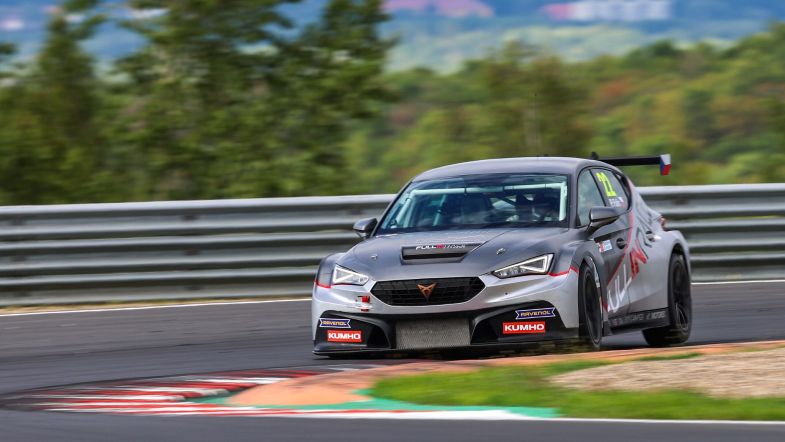 Guest driver at Petr Fulín took a dominant win at Autodrom Most in the first race of the TCR Eastern Europe finale weekend, ahead of Petr Čížek and Petr Semerád, who started from the back of the grid.

Czech racer Fulín started the race from pole position ahead of Sebastian Steibel in an all-Cupra front row. Fulín’s teammate Čížek lined up in third, with the current championship leader Bartosz Groszek in fourth.

Groszek’s main title contender Semerád had an incident with Vít Smejkal in qualifying and both drivers failed to set a time because of it, meaning Semerád started from the back of the grid.

The top four remained in the same order as the race got underway, while Semerád managed to get up to sixth position. The Hyundai driver then overtook Adam Rzepecki for fifth, who was then passed by Semerád’s teammate and team boss, Václav Janík.

It didn’t take too long for Semerád to get to the back bumper of Groszek, while Fulín was a long way ahead of Steibel and Čížek. Semerád attempted an overtake on Groszek into Turn 1 at the start of lap eight, but couldn’t get ahead of the Audi driver.

Čížek attacked Steibel into Turn 1 of the following lap, and managed to overtake the Cupra driver for fourth position. Groszek didn’t waste time either and passed Steibel two corners later for fifth.

German racer Steibel continued to fall down the order, being overtaken by Semerád on lap ten.

Semerád attacked Groszek again on lap 13 and the two made slight contact, enough to unsettle Groszek’s Audi and open the door for Semerád who advanced into third place.

Petr Fulín crossed the finish line first to a dominant victory ahead of Čížek in what was a Fullinrace Academy 1-2 finish, with Semerád completing the podium.

By finishing third, the Hyundai racer has got one point more than Groszek in the title fight, with the final race of the season scheduled for tomorrow at 13:30 CEST.