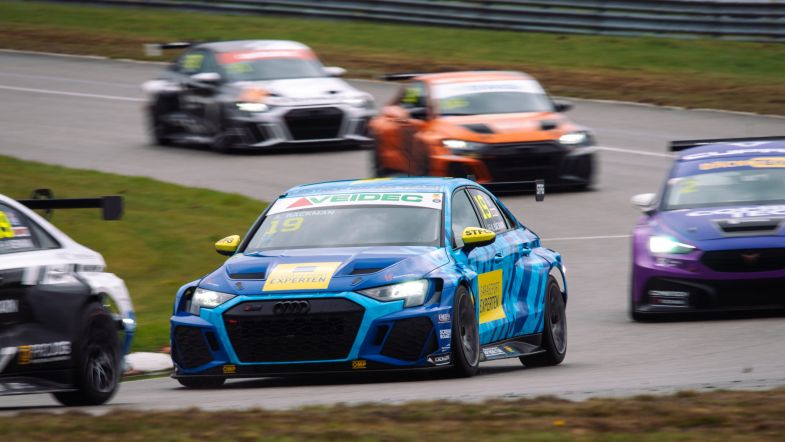 Brink Motorsport driver Hugo Nerman started from pole position and claimed the lead at the start on a drying track, with all drivers starting on wets.

Tobias Brink made a strong start and got ahead of Dahlgren up to third place. But the luck was not to last long for the Audi driver who was hit hard from behind into Turn 2 by Exion Racing driver Calle Bergman.

Bergman locked his wheels under braking, sending both drivers across the gravel trap, dropping Brink to finish tenth and Bergman 13th after a drive through penalty for the incident.

Lestrup Racing Team driver Oliver Söderström was on a charge early in the race and had made his way up to fifth position by lap two from ninth on the grid.

Bäckman put pressure on Nerman early on for the lead, passing the fellow Audi driver at the end of lap two after several corners side-by-side.

Nerman seemed to struggle in the drying conditions and soon came under pressure from Dahlgren who passed him a lap later for second place.

MA:GP driver Mattias Andersson was a driver on the move during the race from seventh on the grid, passing Cupra driver Axel Bengtsson for fourth place on lap six.

Andersson snatched the final podium position from Nerman who continued to drop down the order, ultimately finishing eighth.

Bäckman won the race by over four seconds over Dahlgren, with Andersson a distant third, ten seconds behind Bäckman.

Söderström finished a strong fourth from ninth on the grid, with Bengtsson and Exion Racing driver Isac Aronsson rounding off the top six.

The second race of the Anderstorp weekend starts at 13:35 CEST.