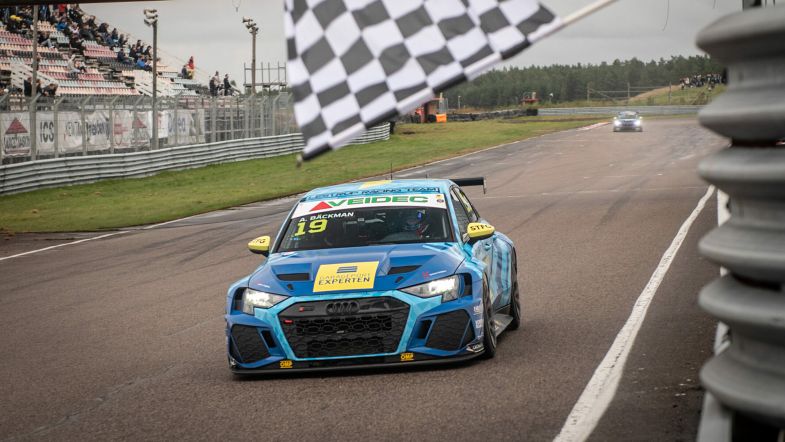 Andreas Bäckman has made it two out of two victories from the STCC TCR Scandinavia weekend at Anderstorp, heading the field from lights to flag in the second race.

The Lestrup Racing Team driver managed to claim the lead ahead of Hugo Nerman as the lights went out, despite starting on the damp part of the drying track.

PWR Racing driver Robert Dahlgren made his way past team-mate Axel Bengtsson on the first lap to claim third position.

But Bengtsson managed to get back up to speed in the second half of the race to fight his way back up to fourth position.

Andersson and Brink clashed in the final corner at the end of lap two, dropping Brink down to seventh position.

Andersson received a yellow card for the contact, three cards means a ten-place grid drop and this was the MA:GP driver’s first.

Marius Solberg Hansen made strong progress to finish eighth and secure the reversed grid pole position for the third race.

Bäckman was on his own at the top to win the race by 4.4 seconds ahead of Nerman, with Dahlgren completing the podium in third position. 18 points separate Dahlgren and Bäckman in the drivers’ championship.

Bengtsson finished fourth ahead of Andersson and Oliver Söderström.

The third and final race of the weekend starts at 15:15 CEST.