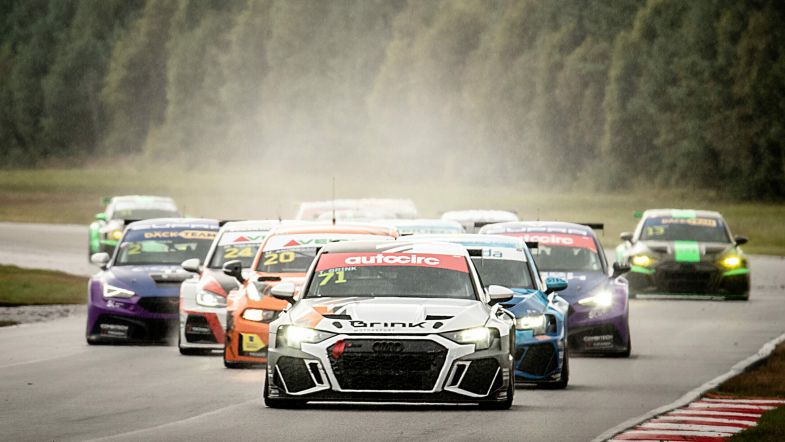 Norwegian privateer Marius Solberg Hansen started from the reversed grid pole, but made a mistake at the exit of the first corner which saw him drop down to fourth position and handing the lead to Brink.

PWR Racing driver Dahlgren started sixth but made his way past team-mate Axel Bengtsson to fifth on the opening lap.

Dahlgren continued to move up, making his way past Lynk & Co driver Andersson to third on lap five.

All cars started the race on slicks and rain started to fall after a couple of laps.

This caught out Johan Lund who beached his Audi in the gravel at Turn 4, bringing the safety car on track on lap six.

The field was released with one lap left of the race as the rain increased in strength.

Despite the heavy rain fall, all cars managed to get through the last lap without any major incidents.

Brink won the race 1.5 seconds ahead of Dahlgren, with Andersson in third.

Hugo Nerman finished fourth ahead of Bengtsson, while Race 1 and Race 2 winner Andreas Bäckman only managed sixth from eighth on the grid.

Söderström’s Audi did however not pass the post-race ride-height inspection, excluding him from the race.

Dahlgren’s lead has shrunk by four points after the Anderstorp weekend, with Bäckman trailing the reigning champion by 24 points. Andersson is third, 37 points behind Dahlgren, with Brink in fourth, 41 points from the lead.