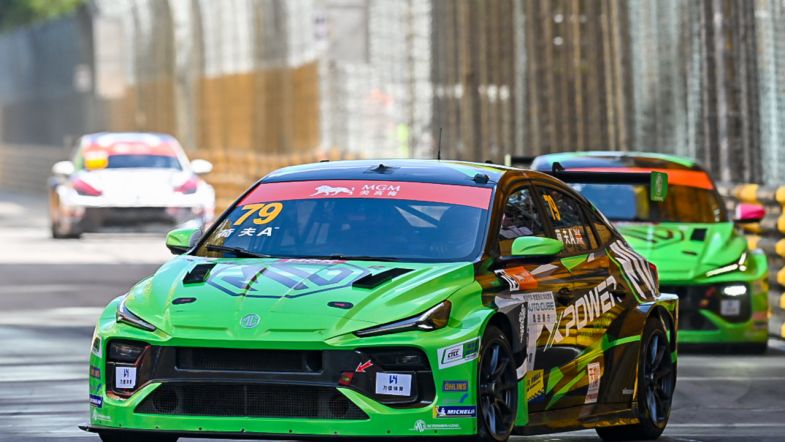 Rob Huff and Filipe de Souza shared the wins in the opening races for the two headline touring car events on the streets of Macau.

Huff qualified on pole for the TCR Asia opener in his MG5 and was given a boost in his bid to add to his Macau record when fellow front-row starter Jiang Teng Yi failed to get away from the line at the start of the green flag lap in his CTCC-spec Volkswagen.

The Briton duly led the field away into turn one ahead of David Zhu’s Lynk & Co and the similar Teamwork car of Jason Zhang, with Martin Cao slotting into fourth and Sunny Wong producing an astonishing run down to Lisboa for the first time as he rocketed up the order from 14th on the grid to end the opening lap in fifth spot.

Cao grabbed third from Zhang at Lisboa on the second lap when he made a late dive down the inside in the MG, which opened the door for Wong to also nip ahead on the exit, and Cao then repeated the move on the next lap as he grabbed second from Zhu to make it an MG 1-2.

A charging Cao then started to reel in Huff at the front of the field as the MG pair eased away from the Lynk & Co racers behind but heading into lap five, Cao suddenly slowed across the line with an apparent mechanical issue, dropping him back to fifth place before the car got back up to speed.

Cao’s issue left Huff with a comfortable lead at the front and he was able to take an eleventh victory around the Guia circuit with relative ease ahead of the squabbling Lynk & Co trio.

Zhu would ease away from the fight for third over the closing laps as Wong and Zhang diced for the final place on the podium, with Wong ultimately securing the spot to cap a fine recovery from his trip into the wall in qualifying despite Zhang’s best efforts to find a way ahead.

The fight between the pair allowed Cao and Zhang Zhen Dong to close in and make it a four-way fight for the podium heading into the final lap but when Cao then seemed to slow again, it allowed his team-mate through and dropped the two MGs away from the fight.

Cao however would hold on to take sixth spot ahead of Rodolfo Avila – who grabbed seventh on the final lap when Yan Chuang ran straight on at Lisboa in his Lynk & Co.

Lin Cheng Hua’s Audi was the only retirement after heavy contact with the barriers on the final lap, with the car then going up in flames afterwards.

De Souza’s victory came in the first race for the TCR Asia Challenge, which kicked off with the Honda of Andy Yan on pole after he outpaced Lo Sze Ho’s Hyundai in a truncated qualifying session on Friday.

The drama started before the race had even kicked off after Lai Jing Wen slammed into the barriers at turn one whilst warming his tyres on the green flag lap. It meant the race would instead kick off behind the safety car as the Audi was recovered, with the action proper instead starting on lap two.

The lead pair nailed the restart but Yan then spun at Lisboa, with Lo Sze Ho also going off in avoidance and Ruo Han Huang amongst those delayed as he was forced to come to a halt from third spot – having jumped ahead of de Souza going through turn one as the eventual race winner slipped back to fifth.

De Souza had managed to reclaim fourth in the run to Lisboa ahead of Hu Heng, and avoided the issues ahead to move into the lead, with Cheong Chi On making it an Audi 1-2-3 at the front.

In what would prove to be a chaotic affair, with multiple drivers finding the wall, de Souza was able to control the race from the front to take the first win for the Guia Race from Hu Heng and Cheong Chi On, with the Honda of Leong Keng Hei in a distant fourth – albeit only after Jason Mok took a trip down the escape road at Lisbao late on whilst fighting for a place on the podium.

He would recover to take sixth having also dropped behind Chan Weng Tong’s Volkswagen.