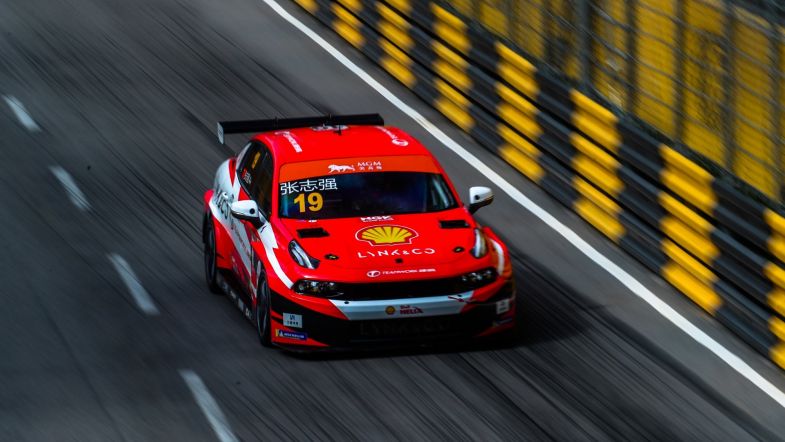 Jason Zhang secured victory in the second TCR Asia race of the weekend in Macau, with a second win of the weekend for Filipe De Souza in a chaotic race two for the TCR Asia Challenge seeing him take Guia Race honours.

The TCR Asia reverse grid race kicked off with the MG of Zhendong Zhang leading the TCR field behind the CTCC-spec Volkswagen of Gao Hua Yang, but Zhang failed to get away from the line, with the Lynk & Co of Yan Chuang instead briefly taking the lead from the VW as the field headed down towards Lisbao for the first time.

Gao lead the opening lap from Chuang and the MG of Rodolfo Avila, with Jason Zhang having slotted into fourth from David Zhu and race one winner Rob Huff.

Heading down to Lisboa for the second time, Jason Zhang was able to make a move around the outside of Avila to take third spot, with Huff unable to make a similar move stick on Zhu as he was forced to stay in sixth spot. Behind, the other Teamwork Lynk & Co of Sunny Wong bowed out of the race, with a spin at turn one seeing him clatter into the wall.

Wong’s stranded car saw the safety car deployed, with the racing action then getting back underway on lap five just after confirmation that Chuang had been hit with a 20 second penalty for an issue at the start.

Jason Zhang wasted little time in grabbing second on the road at the restart with Huff also making a move on Zhu going into Lisbao in the MG, and Zhang quickly closed onto the rear of the VW at the front.

Exiting the Melco hairpin, the VW suddenly slowed and dropped back down to fifth, giving Zhang’s Lynk & Co the lead from the penalised car of Chuang, and the MGs of Avila and Huff.

Huff moved ahead of Avila at the start of lap six with a move at Mandarin, which also allowed Gao to move back into fourth on the road.

Eager to keep Zhang in his sights, Huff grabbed second at Lisboa on the following lap but Zhang’s advantage at the front was too great for the Briton to close in and take the victory, despite drawing onto the rear of the leader on the final lap.

Huff tried into Lisboa for the final time and was then fixed on the rear of the Lynk & Co through the twisty part of the circuit but Zhang held on at the front to secure another win himself on the Guia circuit.

It also helped to secure the teams’ title for Teamwork.

Gao’s VW crossed the line in third spot ahead of Gao and Avila, with Chuang taking the flag in sixth spot having lost places at Lisbao on the penultimate lap – although his time penalty would demote him down to tenth and instead handed a top six finish to Martin Cao.

As had been the case on Saturday, the TCR Asia Challenge race that followed would prove to be chaotic as de Souza doubled up to secure a home win in the Guia Race – although there would only be limited actual racing available due to various incidents on track, including one that ultimately brought the action to an early end.

With Hu Heng missing from the grid, de Souza started alone from the front row and took the lead of the race from Leong Keng Hei and Cheong Chi On, with de Souza holding a large advantage at the end of lap one.

Having briefly slipped to fourth behind Chan Weng Tong, Cheong moved back into second at Lisboa on the second lap when the two cars ahead ran wide but was immediately passed on the exit of the corner by a charging Lo Sze Ho – who had started back in twelfth.

That move came seconds before the safety car was deployed to recover the stricken Alfa Romeo of Yiu Lung from the barriers towards the end of the lap.

Ahead of the restart on lap five, Ho slowed and dropped back behind Cheong who in turn, then tried to slow to let the Hyundai past again – handing de Souza a lead of six seconds immediately.

Ho wasted little time in reclaiming second and was followed through by Leong Keng Hei and Ryan Wong heading through turn one but Jason Mok then spun his Honda into the wall to bring the safety car out for a second time.

Before the caution came out, Andy Yan – from the back of the grid – managed to clear Cheong and Wong, and then took third from Leong when he spun his Honda.

It would take until the final lap before Mok’s car was recovered to allow the race to resume as a one lap sprint and that was where it would all go wrong at the front.

As de Souza retained the lead, Ho appeared to be tapped by Yan as the pair went through Mandarin, with the result being the Hyundai spinning at speed into the barriers on the inside of the corner before being fired back across the circuit into the wall on the outside where it was collected by Wong and Cheong.

With the Hyundai destroyed by the impact, the race was immediately red-flagged with the result being declared as at the end of lap eight – meaning de Souza took the win from Ho, who was taken to hospital for checks following the accident, and Yan.