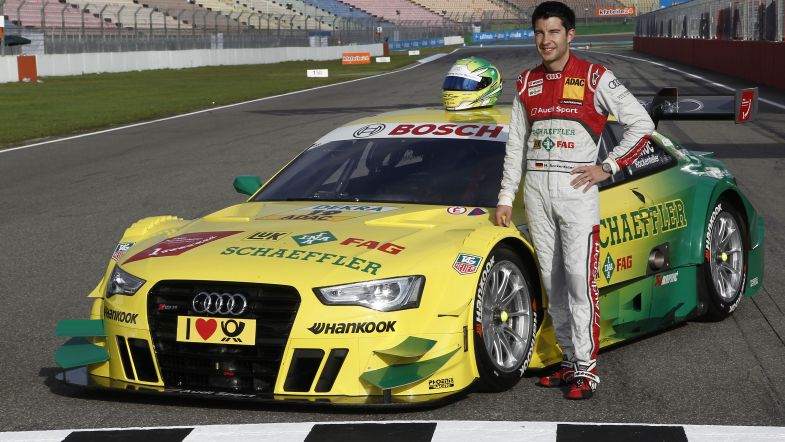 Mike Rockenfeller to continue with Phoenix Audi in 2014

2013 DTM champion, Mike Rockenfeller, has announced he will continue driving with the Phoenix Audi team next season.

Rockenfeller has driven the yellow and green Schaeffler sponsored Phoenix prepared Audi RS 5 DTM since 2012 and took his first DTM title with the Ernst Moser led squad with two races remaining in 2013.

Schaeffler will remain as one of the sponsors to the Ernst Moser led team for the next three years. Martin Tomczyk also took the 2011 DTM title with a Schaeffler liveried Phoenix A4 DTM.

“The Schaeffler Audi has become an absolute crowd-pleaser with the DTM fans in recent years and what’s more, was our best-placed car three times in succession,” said Audi’s head of DTM, Dieter Gass. “Therefore, we’re delighted in more ways than one that we’ve been able to conclude a long-term extension of this partnership and that this dream team is retained for the DTM.”

“Mike [Rockenfeller] has been a valuable and indispensable member of the Audi family for many years,” said Ullrich. “Not only because he’s an experienced and fast race driver but also because he’s a very special person.

He’s a perfect fit for us, and considering that he’s only 30 years old, the future belongs to him, both in the DTM and at Le Mans.”

Rockenfeller was equally as happy with the announcement.

“Audi and Schaeffler are simply two fantastic partners,” said the 2013 DTM Champion. “In both companies, motorsport evokes a lot of emotions [and] I can really feel the enthusiasm of the employees whenever I visit any of the locations.

“To represent these brands on the race track and to be so successful [is something] that makes me proud.”

Before 2012, Rockenfeller also drove for the Phoenix team in 2010. Since he joined the DTM in 2007, he has also driven for Audi’s Rosberg and Abt Sportsline teams.