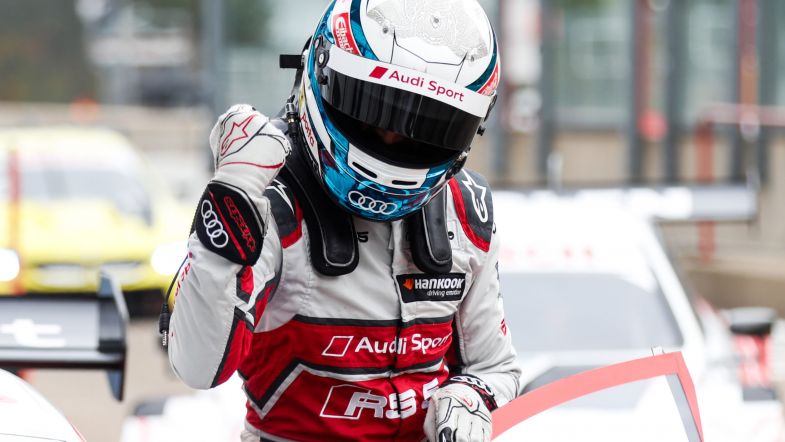 René Rast admitted he was full of emotion after successfully securing his third DTM title during a dramatic final weekend of the Class 1 era at Hockenheim.

The defending champion had seen his lead in the standings cut to 13 points after the opening race of the finale on Saturday when closest rival Nico Müller beat him to victory, but Rast responded in fine style in Sunday’s qualifying session as he romped to pole.

The three bonus points, allied to a non-score for Müller, meant Rast held a 16 point lead going into the race and the Team Rosberg driver would produce a dominant performance in the race as he beat his fellow Audi racer to the win by more than ten seconds.

Victory in the race meant Rast was able to not only wrap up the championship title but also achieved his goal of moving ahead of Mattias Ekström in the all-time winners list – making him the leading Audi driver in series history in terms of wins.

“It’s very emotional,” Rast admitted at the finish, “not only because we have won the drivers title, but also because that was my final lap with this beautiful car. Lots of things have come together for us as in the middle of the season, we had almost lost the title and within five weeks, we have won it again.

“There are so many moments that come to mind and it was hard to keep the focus in that race at times, but I’m so happy for everyone.”

Rast ultimately ended the season 23 points clear of Müller in the standings, with Robin Frijns in third having been in outside contention going into the final rounds of the year.

“The fight with Nico all year has been an honour as he is fast driver and would have deserved the title – and Robin would have deserved it as well,” Rast added. “We just made a few less mistakes, and we had a quick car at the end of the year when it really mattered.”