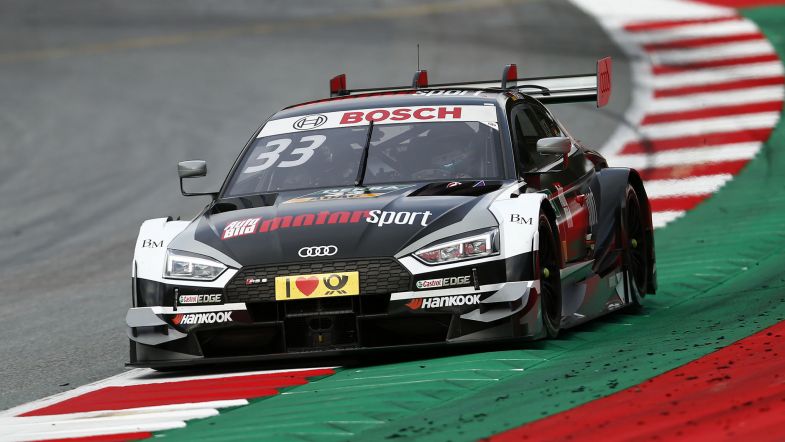 Audi Sport again swept the podium at the Red Bull Ring in the second race, with René Rast taking his third victory of the year ahead of Mike Rockenfeller and Nico Müller, although it was Jamie Green who had dominated the race until a gearbox problem hit him just two minutes from the end.

At the start, Green made the most of his pole position to hold the lead ahead of team-mate René Rast and the BMW M4 of Marco Wittmann.

Audi driver Mattias Ekström and BMW’s Augusto Farfus got their mandatory pit stops out of the way at the end of the first lap, meanwhile Green was reported for being in an incorrect grid position, with the stewards not taking any action.

Rockenfeller overtook BMW’s Marco Wittmann for third place at Turn 2 on lap nine, with Wittmann pitting at the end of the lap.

Wittmann came out just ahead of Ekström who, with his tyres already up to temperature, was right on the tail of the BMW by the end of the lap. The Swede attacked at Turn 2 on the following lap, with the reigning champion defending his position and going side-by-side until the Swede backed off at Turn 4, giving just enough time for Wittmann to bring his tyres up to temperature and pull away.

Green pitted from the lead at the end of lap 12, with team-mate Rast pitting two laps later, slotting right behind the Briton.

The Audi pair of Rockenfeller and Müller performed their tyre change at the end of lap 15, sandwiching Wittmann as they returned to the track. The BMW driver overtook the Audi on the outside at Turn 3, with Rockenfeller locking the brakes and letting Müller and Ekström through.

As Müller warmed up his tyres and started attacking Wittmann, the Swede who losing over half a second a lap, with Rockenfeller guarding his rear. Müller finally overtook Wittmann around the outside of Turn 3 on lap 22, and then held up the BMW to allow a struggling Ekström to close the gap, while Rockenfeller overtook Ekström on lap 27 in an attempt to catch Wittmann.

The safety car was called into action on lap 29 as Mercedes driver Lucas Auer was hit by BMW’s Bruno Spengler, with the Austrian retiring with damage to his rear-right bodywork and suspension. The Canadian would receive a drive-through penalty for the manoeuvre.

A very disappointed Auer said: “It’s always like this when you qualify at the back. I’m glad to have competed here in front of my supporters, they are more important than the results.”

The race was green again on lap 32, and with just ten minutes left. Green held the lead, followed by Rast and Müller. Rockenfeller took the inside of Wittmann at Turn 1 at the restart, with Ekström following suit at Turn 2, with the BMW also passed by Paffett’s Mercedes, with the Briton passing the Swede’s around the outside at Turn 3 on lap 33.

Ekström was ordered to give the place back to Wittmann after he was found responsible for pushing the BMW off the track at the restart, with the Swede also receiving a warning.

Rast continued to challenge Green, before the Briton began to slow with a problem and was overtaken by the bulk of the field. Rast inherited the lead, followed by Müller and Rockenfeller, with Ekström taking fifth back from Wittmann, who also had traction issues coming out off the corners and was now challenged by fellow BMW driver Timo Glock.

Rast went on to take his third victory of the season, with Audi securing another 1-2-3 result with Rockenfeller and Müller completing the podium.

Paffett was fourth at the line, followed by Ekström, Wittmann and Glock. Audi’s Loïc Duval was able to recover to finish eighth, with the Mercedes of Paul di Resta and Robert Wickens completing the top ten.

Gass: “It’s a fantastic weekend for Audi, completed the podium again and great result for Mattias, but it’s unfortunate for Jamie, he told us on the radio he had a gearbox problem.”

Ekström continues to lead the standings with 172 points, with Rast now his main contender 21 points behind. Green is 35 points adrift, with Wittmann and Rockenfeller tied three points points back. Auer remains in contention, 41 points behind the Swede, with 56 points to play for at the season finale at Hockenheim in three weeks.