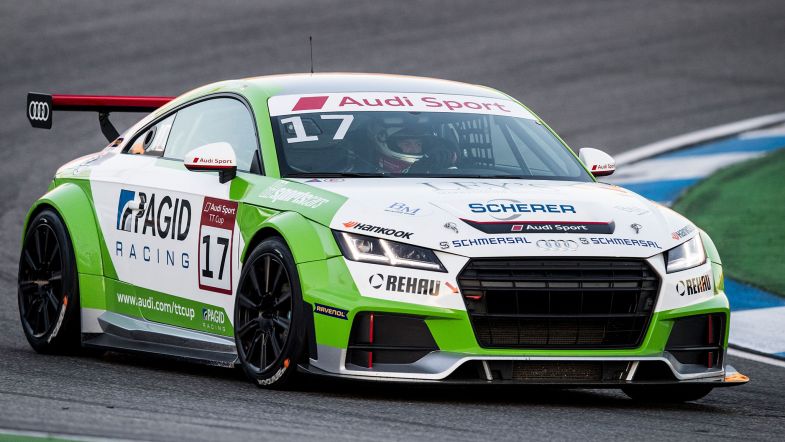 Frank Stippler put on a lights-to-flag victory at the ‘Race of Legends’ at Hockenheim this afternoon, an event which was organised by Audi Sport to bid farewell to the TT Cup.

At the start, Stippler held the lead from pole, followed by Frank Biela. Filipe Alburquerque tried to defend the inside at Turn 1 from Tom Kristensen, with both touching and the nine-time Le Mans winner spinning and colliding with Biela.

The safety car was called into action, staying out for a lap, with Biela retiring to the pits. The race restarted with Stippler in the lead, now followed by Stephane Ortelli. Marcel Fässler soon overtook Ortelli for second place, with the Monegasque attacking the German and losing out to Lucas Di Grassi at the Mercedes Kurve on lap three.

Next to overtake Ortelli was Lucas Lühr and Marco Werner on lap five, as Di Grassi overtook Fässler for second place. Rahel Frey took Ortelli’s inside at Sachs, with both touching and the Monegasque going off track and retiring in the pits.

Fässler continued to lose ground, falling into Lühr’s grasp, who took third place at Sachs on lap seven. Lühr, however, had to hand the position back after receiving a warning for pushing Fässler, in the process losing a further position to Werner. Lühr took the inside at the hairpin on lap nine, colliding with Werner. The GT driver had to retire, with Lühr receiving a warning for the manoeuvre.

Di Grassi continued to close the gap to Stippler, but the German won by eight-tenths of a second, with Fässler completing the podium.