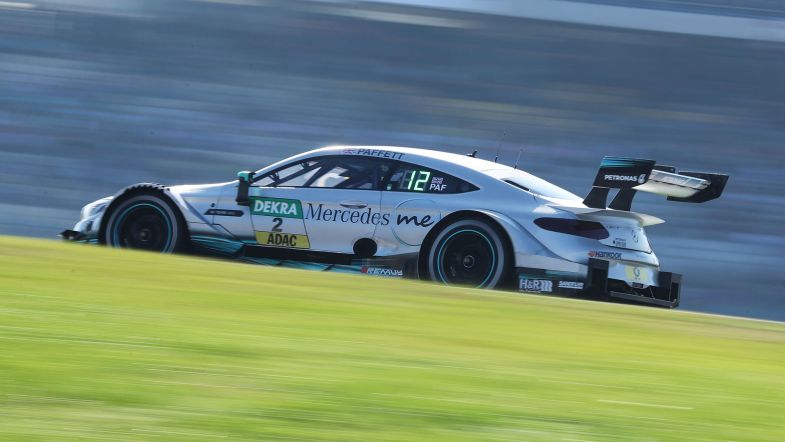 Gary Paffett: “I would be open to staying in the DTM with another manufacturer”

Mercedes AMG driver Gary Paffett says he hopes to find a way to remain with Mercedes after the German manufacturer leaves the championship at the end of 2018, but doesn’t rule out finding a programme with one of the other manufacturers in the DTM if there’s no option to continue.

The Briton finished this season with a strong performance at Hockenheim, with the Briton scoring points in 14 of the 18 races.

Paffett qualified for yesterday’s race in 11th, and worked his way to be fourth at the finish line. “We knew from the start of the race what our strategy would be, based on our qualifying performance,” Paffett said to TouringCarTimes. “We had more in the car, but I had a bit of damage from this drain cover, so we knew that we had to try to gain places.”

The strategy and resource management was key for Paffett’s improvement during the race: “We knew that if we pitted early we would have the chance to come on better tyres and overtake a lot of people. We had a very good pace in the car during the first stint and the same after we changed tyres.”

“I had managed to save quite a bit of DRS to overtake other people like Nico (Müller, from Audi) or Paul (di Resta, from Mercedes). Then, at the end, I caught the two BMWs of Augusto and Maxime, who had older tyres and were suffering degradation. When I caught them, I had two DRS activations, one for each, and had to pick when to use it. I managed to pass both of them to finish in P4.”

The Briton has also made changes to his driving style to adapt to the new regulations, and feels they have made a difference: “I feel I could improve in qualifying and I had been thinking about how could I set up the car differently and other things I could do. From mid-season on I have been implementing some changes in the way I do things and I have become more competitive. Unfortunately, as a brand we have been less competitive, but I feel I have been more competitive than my team-mates.”

“Sometimes we want to make the car into something we like to drive, rather than something that would be competitive and that was something I had to change in my mind with these new tyres, but I got there in the end.”

With Mercedes departing the series at the end of 2018, a question mark appears over Paffett’s mid-term future. The Briton said: “The plan (for next year) is to be here in DTM and fight for the championship as always. There will be some changes to make the cars more competitive and close together and then, beyond that, I don’t know. Now, during the winter, when the season is over, it’s the time to think about it and look at ideas.

“Mercedes has been a part of my life since forever, so I would aim to continue with them. But if there wasn’t a chance with Mercedes and I could stay in the DTM with another team, I would consider it as an option,” Paffett concluded.