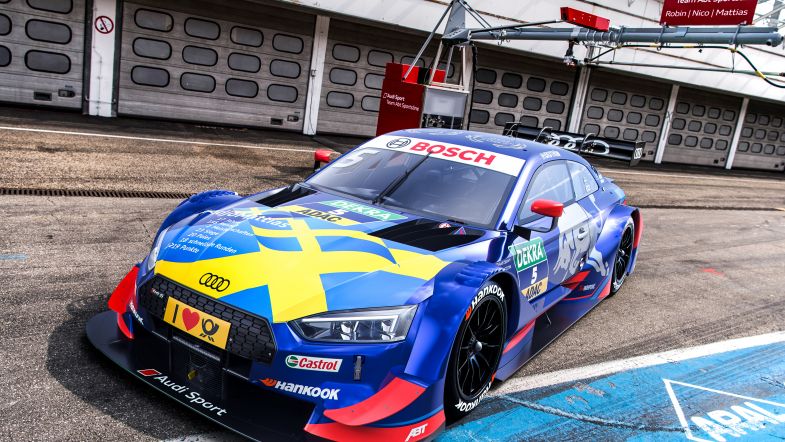 Mattias Ekström back in DTM season opener for farewell race

Mattias Ekström will participate at the DTM season opener at Hockenheim in an additional Audi RS 5 DTM as a farewell event for his fans and followers, with the Ingolstadt-based team fielding seven cars.

The Swede announced his departure from the series earlier this year after 17 seasons and two championship titles to focus on the Audi-supported programme in the World Rallycross Championship.

Audi Sport will field seven cars, their six full-season drivers, plus an additional car for Ekström managed by Team Abt Sportsline. Ekström hasn’t tested the RS 5 DTM modified according to the 2018 regulations yet, which has an estimated 30% reduction of downforce.

“Mattias has always got used to a new car quickly,” said Audi Motorsport boss Dieter Gass. “I’m sure that in his farewell race he’s not going to be just cruising either. He’ll live up to his motto ‘Go hard or go home’ in every respect.”

“I suppose I’ll be signing more autographs this weekend than normally in a full season,” said Ekström. “But I’ll be happy to do that. It’s great that Audi is making this possible for me. After 17 tremendous years, it was an incredibly tough decision to no longer race in the DTM. The day it was announced was one of the most emotional ones in my career. I’m sure there’ll be plenty of goose-bump moments at Hockenheim too. I’m mega excited about it already.”

“Mattias decided in winter to end his unique DTM career,” added Gass. “He also told us that he’d very much like to say goodbye to his DTM fans in a special way. This is how the idea of a farewell weekend was born. I think that for him, for the DTM, for the fans and, obviously, for Audi too, it’s great that he’ll be on the grid once more in the season opener at Hockenheim. There were a few obstacles to overcome, but we made the fielding of a seventh Audi RS 5 DTM possible.”