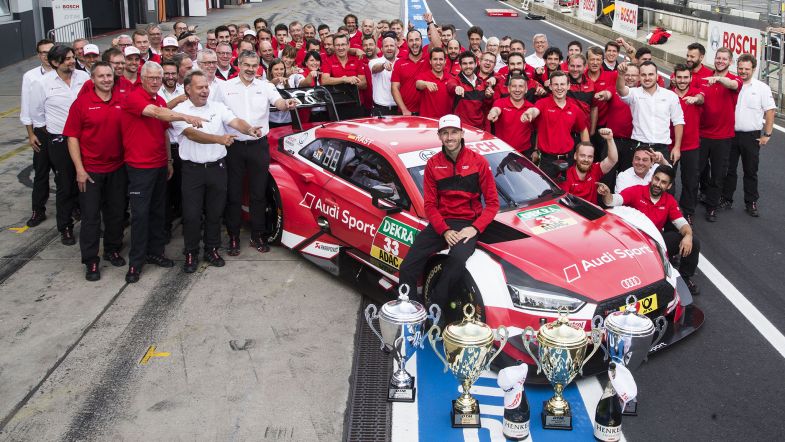 Audi Sport Team Rosberg driver René Rast was on strong form at the Nürburgring, making history by scoring two pole positions and two victories in the same weekend, a first for the series since the return to the double header weekends.

“We’ve made history,” the reigning champion told TouringCarTimes. “Two pole positions and two victories in the same weekend had never happened in the history of DTM before and, obviously, it wasn’t an easy weekend for us. We still had to manage the pole positions and go through two hard races. For me, mentally, being in front is easy. But if you see somebody coming close behind and your tyres are driven off it’s hard to keep the focus and not make so many mistakes.”

Rast made it look easy from the outside, but repeating Saturday’s victory wasn’t on the Audi driver’s forecast for the day: “We were never expecting something like this, obviously when you arrive to the weekend you hope for a podium, and I achieved that on Saturday, so I ticked the boxes and thought ok, whatever comes now is a big bonus. But you never expect to win twice in a weekend. It’s something that has never happened before in DTM and we are very proud to have achieved something like this.”

Rast’s first victory of the season at Zandvoort looks like a turning point for the reigning champion who has scored 117 points and three victories since then and is now third in the championship, 57 points behind Mercedes-AMG’s Gary Paffett. Asked about how it has affected him, Rast said: “I would say that the setup has since them suited my driving style much better. I have found a sweet spot where the car is right in a good window and we are able to extract that time and time again. Obviously you need a perfect team behind you and perfect driving.”

The next round of the championship takes place at the Red Bull Ring in Austria, a track not favourable to Audi Sport on paper. Rast is cautious about his chances in two weeks time: “It’s a track different to all the rest in the calendar. We will see this if this year we can be strong again. It all depends on qualifying, because if you qualify well you can then extract a good weekend again. But anything can happen, so we don’t know what we can expect.”