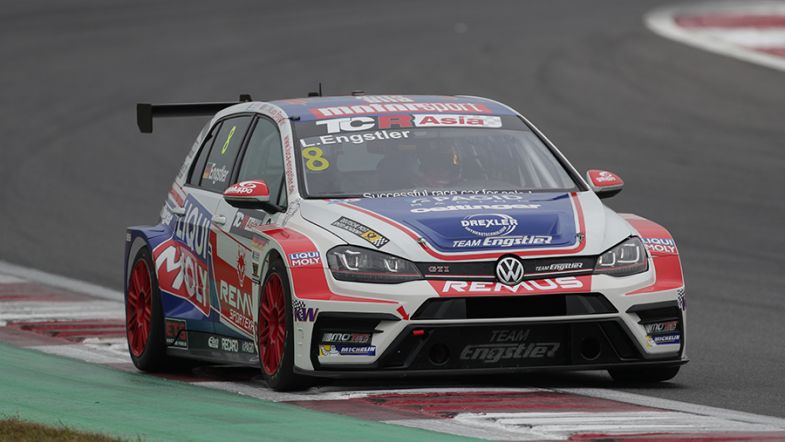 Having extended his advantage in the points in race one, Luca Engstler duly wrapped up the TCR Asia series title with a second victory of the weekend in the Shanghai season finale.

The German driver made light work of getting to the front of the field from the reverse grid start, with a stunning get-away seeing him vault into the top three going through the opening corner.

By the team the field completed the opening lap, Engstler had not only got ahead into the lead but has also started to pull away at the front, with TCR China front-runner Alex Hui initially slotting into second.

It wouldn’t take long for the two remaining Engstler-run Volkwagens to get ahead however, with Diego Moran and Mitchell Cheah moving into the top three on the second lap.

As they diced for position, Engstler was lapping more than a second quicker at the head of the field, meaning that by the time Cheah was able to find a way ahead of Moran, his chances of pushing for victory were long gone.

Instead, Engstler could control proceedings from the front of the pack to wrap up the championship crown; his second of the year after taking the TCR Middle East title back in February.

Cheah secured second spot in the championship with the runner-up position, with Moran ensuring a second podium lock-out of the weekend for the Engstler squad as he crossed the line in third.

With Lo Sze Ho not competing this weekend, the three Engstler drivers also secured the top three spots in the championship standings.

Hui took fourth place overall as the best of the TCR China entrants, boosting his championship challenge as he closed the gap on Henry Ho and Eurico De Jesus – with De Jesus finishing second in class and sixth overall; the two China front-runners being split by TCR Asia Cup winner Kelvin Wong in the end results.

Ryan Wong’s Audi was seventh after he lost out in a race long fight with De Jesus, with Kin Kong, Douglas Khoo and Zhen Chen completing the top ten.