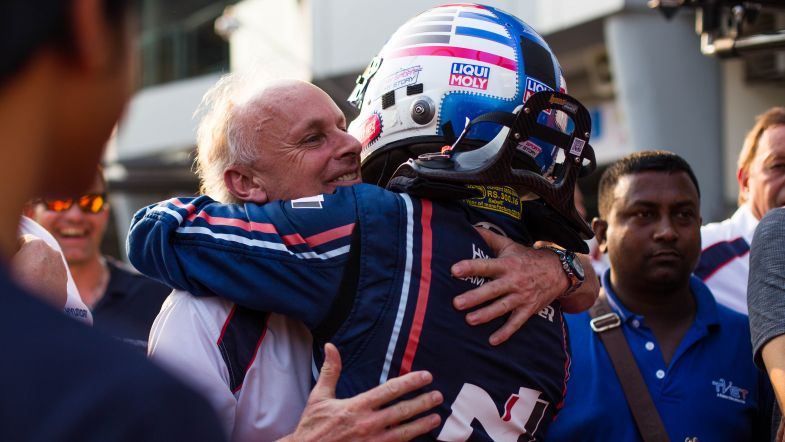 Luca Engstler romps to victory in the first race at Sepang

Luca Engstler took an easy victory in the first round of the 2019 TCR Asia International Series at Sepang, completing an Engstler Motorsport 1-2-3, with the Hyundai driver followed by Hyundai team-mate Theo Coicaud, with the Volkswagen of Diago Moran completing the podium.

The race started one car down, after Teamwork Motorsport’s Alex Hui suffered an incident in the pit lane, leaving position six on the grid empty.

At the start, Engstler got away well from pole position, while alongside him, team-mate Coicaud stalled his Hyundai i30 N TCR and plummeted down the order, with Moran leaping up to second, with Pepe Oriola, in the South Korean Solite Indigo Racing team effectively holding station in third.

The Spaniard was battling Ecuador’s Moran throughout the first lap, while Coicaud recovered ground, and was back up to fourth by the end of lap three.

The safety car was deployed on lap four after an incident between the Engstler Volkswagen of Roland Hertner and the Teamwork Motorsport Audi of David Lau, which left Lau’s RS 3 LMS stranded on circuit.

When the race resumed, Coicaud quickly passed Oriola’s identical Hyundai, and then closed down on Moran’s Volkswagen, eventually making his move at the final corner on lap nine and regained his second position from the start.

Engstler went on to win the race by 4.7 seconds from Coicaud, with Moran third, and Oriola finishing fourth on his TCR Asia series debut.

Jakraphan Davee finished fifth in the Alpha Factory Cupra TCR ahead of Daniel Miranda’s Eurasia Hyundai, with the Volkswagen of Adam Khalid, the Hyundai of Kim Jun Soo, the Cupra of Douglas Khoo and the Hyundai of Gao Hua Yang completing the top ten.