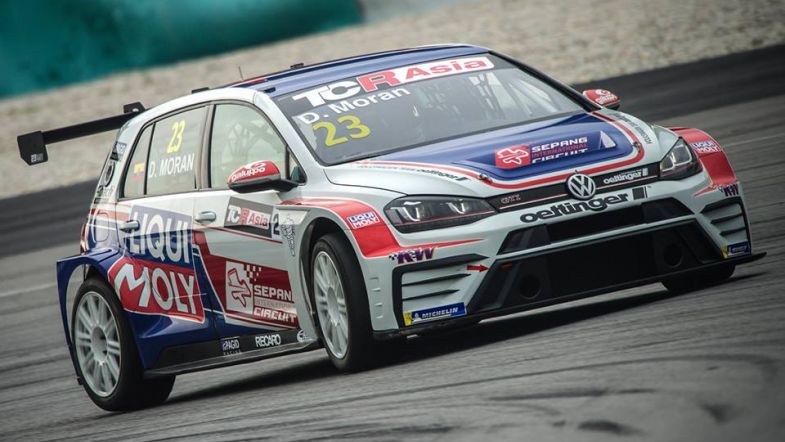 Diego Moran has won the second round of the 2019 TCR Asia International Series at Sepang for Volkswagen Team Oettinger, in a race full of incidents which including a clash between European racers Pepe Oriola and Luca Engstler.

Volkswagen Team Oettinger’s Roland Hertner started from pole position on the partially reversed grid, but was quickly passed by the Eurasia Motorsport Hyundai i30 N TCR of Daniel Miranda into Turn 1.

Diago Moran also made a strong start and launched up into second in his Volkswagen, while Teamwork Motorsport’s Alex Hui launched his Audi RS 3 LMS up until third from fifth on the grid.

Hui was quickly caught and passed by the Solite Indigo Hyundai of Pepe Oriola, as well as the Engstler Motorsport entry of Luca Engstler, and the two drivers then began a long tussle for the final podium spot.

Engstler made his first lunge to grab the spot on lap four, making minor contact at Turn 1 and both continued on; with the two drivers making even heavier contact a lap later, with Oriola being tipped into a slide, but the Spaniard still held the position.

One lap later, and up front, Miranda had to relinquish the lead after a charge from Moran’s Volkswagen Golf GTI TCR at Turn 3, while behind the second Engstler Motorsport Hyundai of Theo Coicaud made contact with Hui’s Audi, with the Hong Kong driver forced to pit with a puncture.

The Oriola-Engstler battle came to a head on lap seven, as Engstler tried to close the door on Oriola heading into Turn 1, but the two cars locked wheels, with Engstler’s Hyundai spinning off into the gravel trap and into retirement, while Oriola was able to continue on.

Coicaud was now recovering ground after his incident with Alex Hui, and was able to reclaim fourth with three laps to go after repassing the Alpha Factory Cupra TCR of Jakraphan Davee at the final corner.

Moran went on to win the race by 3.5 seconds over Miranda, with Oriola completing the podium.

Coicaud was fourth ahead of Davee and the Volkswagen of Adam Khalid, with Douglas Khoo in the Viper Niza Racing Cupra TCR seventh.

Diego Moran now leads the championship on 42 points, eight ahead of Theo Coicaud on 34, with Pepe Oriola and Luca Engstler tied in third on 30 points each, heading to the next round of the series at the Korea International Circuit on May 3rd.