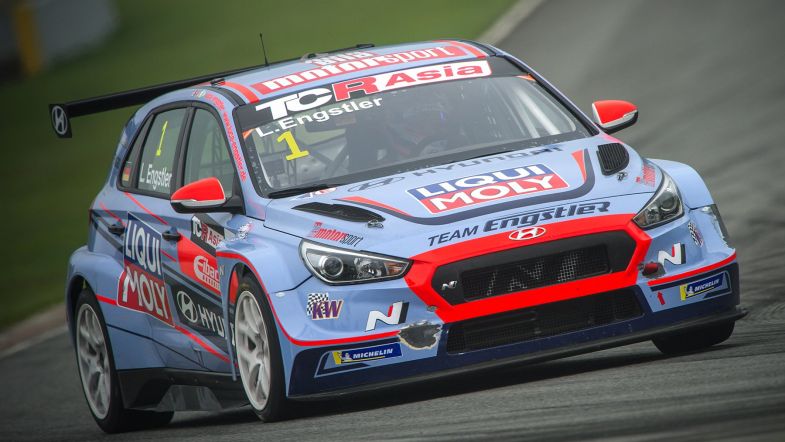 Luca Engstler has taken pole position for the first race of the TCR Asia/China series weekend at Zhuhai, with Dongfeng Honda’s Dan Lloyd set to join him on the front row.

Engstler led the way through Q1 in his Engstler Motorsport Hyundai i30 N TCR with a 1:44.1, while his closest challenger was Martin Xie in the Dongfeng Honda, run by the MacPro Racing team.

The session was red-flagged with 52 seconds to go and not resumed, with the top 12 progressing to Q2 of the 18-car field.

At the start of Q2, Pepe Oriola went off at Turn 9 on his first flying run in his Solite Indigo Racing Hyundai i30 N TCR, which brought out the yellow flags.

Still, it was Engstler who set the first target time in his Hyundai of 1:44.599, before qualifying was red-flagged when the Audi RS 3 LMS of Huang Chu Han, driving for NewFaster Racing, rashed out at Turn 11.

When the session resumed, everyone went out for another run, and Engstler improved his time even further to extend pole with a time of 1:44.008.

Engstler’s new team-mate Diago Moran was second fastest, just two-tenths of a second behind, while Daniel Lloyd qualified third in the Dongfeng Honda Racing Team Honda Civic TCR, and top in the TCR China class, but is set to move up to second as Moran’s time was marked for removal due to track limits.

Filipe de Souza qualified fourth in his Audi, with Daniel Miranda fifth in the Eurasia Hyundai i30 N TCR, just ahead of Pepe Oriola.