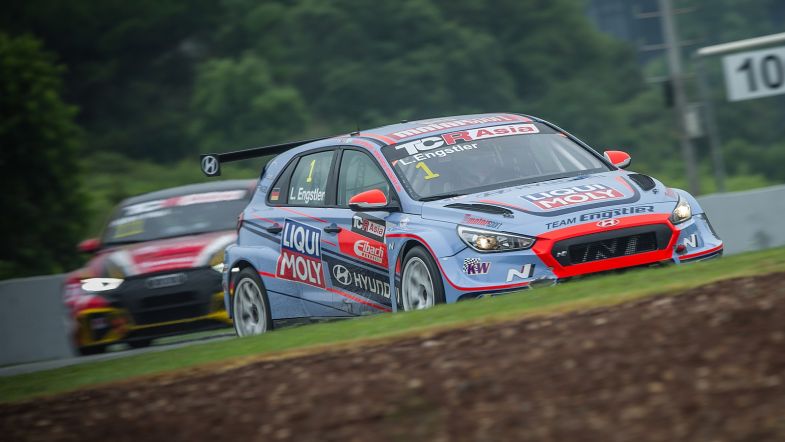 Luca Engstler has extended his lead of the championship after going from tenth to first in just over one lap to claim his third win from four races in the TCR Asia International Series.

It was the Volkswagen Team Oettinger Golf GTI TCR of Roland Hertner who led into the first corner, and pole-sitter Kenneth Look fell backwards in the NewFaster Audi, but Hertner was soon being chased by the Solite Indigo Racing Hyundai i30 N TCR of Pepe Oriola, who had a strong start from fifth.

Luca Engstler was already fast on the move, passing the Teamwork Motorsport Audi RS 3 LMS of Alex Hui for third on the opening lap.

At the end of lap one, Hertner ran wide at the final corner, allowing both Oriola and Engstler through, while Engstler soon overtook Oriola to move into the lead of the race.

The safety car was soon deployed as Hertner was off in the gravel after apparent contact with the Engstler Hyundai of Diego Moran, with the incident marked for investigation.

The race restarted on lap six, and the main action was behind Alex Hui who was fighting to keep back the two Dongfeng Honda Racing Team Civics of Dan Lloyd and Martin Xie.

Rain soon began to fall at the track and caught a number of drivers out at Turn 11, including second-placed Oriola, both the Hondas and Filipe de Souza’s TA Motorsport Audi, who all went off the track, with only Lloyd able to get back out of the gravel trap.

The safety car was out again as Oriola, Xie and de Souza’s cars were recovered.

The race briefly resumed on lap 11, giving the Hyundais of Diego Moran and Daniel Miranda just enough time to pass Hui’s Audi for second and third, before the safety car was called again.

Cheung and Khoo’s cars were both damaged and stranged by the side of the track, while Khalid tried to bring his car back to the pits despite two broken wheels on the right-hand side.

The last safety car stayed out to the end, with Engstler declared the winner after 13 laps ahead of team-mate Moran and the Eurasia Motorsport entry of Daniel Miranda.

Alex Hui was the best-placed non-Hyundai in fourth in his Audi RS 3 LMS, while Huang Chu Han was the TCR China class winner in fifth overall in his NewFaster Racing Audi RS 3 LMS.

Engstler now extends his lead of the championship to nine points over Moran heading to the next round at Shanghai on June 1st-2nd.