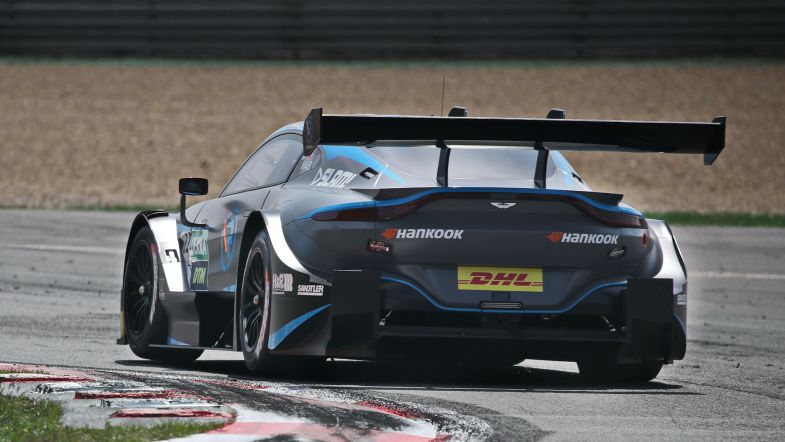 Aston Martin team R-Motorsport scored points for the third time in three races, thanks to Paul di Resta and Ferdinand Habsburg. The Austrian rookie recovered from the back of the grid to open his points account in the German series.

Habsburg qualified in 18th place and pitted at the end of the second lap for fresh tyres to last to the end of the race. The 21-year-old then climbed positions to finish ninth, scoring two points.

“It feels good to have scored my first points in the DTM,” Habsburg said. “I’m also mega happy for the team, who have worked so hard to give me such a great car. I can’t begin to tell you how pleased I am with these two points. It’s great that we managed to achieve a top-ten finish thanks to our clever tactics.”

Di Resta had a similar strategy, pitting at the end of the first lap. But the Aston Martin driver had a problem coming out from his second stop, crossing the exit line despite the pit lane exit being closed. He had to wait until his mechanics gave him the go ahead to avoid a penalty. Despite that, di Resta finished eighth.

“We deployed a different strategy today, which paid off,” said di Resta. “For sure, it was a difficult race again, but we will keep fighting and pull out all the stops, trying perhaps to do extraordinary things in order to achieve good results until we can fight further up front off our own backs.”

Jake Dennis and Daniel Juncadella experienced similar technical issues, losing power on lap 12, with both retiring from the race.

“You have to bear in mind that every race is a test drive for us at the moment, since we have not been able to cover enough test kilometres in the short development time available and have thus not been in a position to avoid problems in the races,” said team principal Dr. Florian Kamelger.

“We’re really pleased with Paul’s four points and the first two points for Ferdinand. We were again able to finish twice in the top ten thanks to great tactics by our pit crew.”

Di Resta is R-Motorsport’s best-placed driver in the championship in 11th place with 11 points. Aston Martin lies third in the manufacturers’ classification with 15 points.