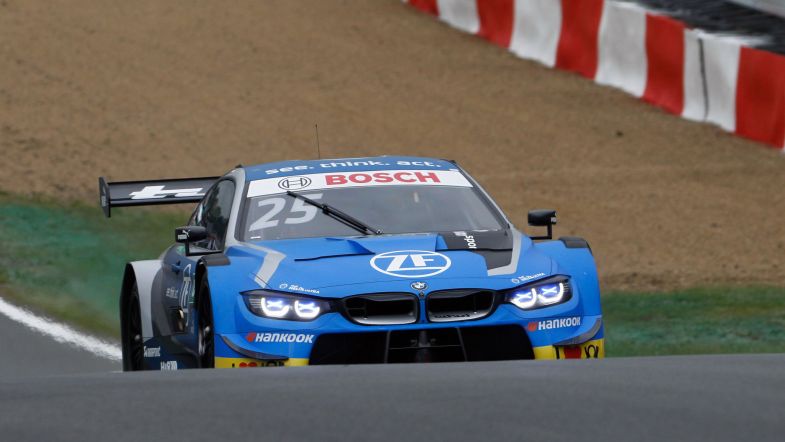 Audi Sport Team Phoenix broke the parc fermé on Mike Rockenfeller’s RS 5 DTM to try to sort out the clutch issue he had suffered in qualifying, with the 2013 champion starting the race from the back of the grid.

R-Motorsport’s Paul di Resta pitted his Aston Martin Vantage DTM at the end of the opening lap for a scheduled tyre change. Rockenfeller followed suit a lap later, as did Ferdinand Habsburg.

Audi Sport Team Abt Sportsline’s Robin Frijns, Team Phoenix’s Loïc Duval and WRT’s Pietro Fittipaldi got a five-second pit stop penalty for a jump start, an issue blamed in a new launch start system in place for this weekend.

Team Rosberg’s Jamie Green pitted from ninth place at the end of lap ten with Eng and Müller also in two laps later; the first of the front runners to do so.

R-Motorsport drivers Daniel Juncadella and Jake Dennis retired with technical troubles on lap 15, with the Spaniard stopping on the track at Turn 7 but the Briton doing so in the pit entrance, causing the safety car to come into action. The woes for Aston Martin continued as di Resta pitted and had to wait to return to the track as the pit exit was closed, albeit having crossed the line with the red light already on.

Team principal at R-Motorsport Dr. Florian Kamelger said: “Looks like Dani had an issue with the throttle and Jake had an electronics failure. We knew that the first couple of races would be difficult, but we have now to investigate what happened.”

The race was restarted on lap 19, with the field in side-by-side formation. Two laps were also added to the total race time, with it now up to 55 minutes plus three laps.

At the restart Spengler kept the lead ahead of Wittmann, with van der Linde attacking Rast and taking third place at Turn 4. Spengler, Glock, Frijns and van der Linde pitted at the end of lap 20, with the Dutch driver taking his penalty at the pit entrance.

At the front Eng, with fresh tyres, overtook Rast for second place, with the Audi driver now in the grip of Team RBM’s Joel Eriksson, also with new tyres. The Swede, followed by Müller and Green, also got through ahead of Rast, who was now down to sixth place and lapping over a second slower than leading Wittmann. 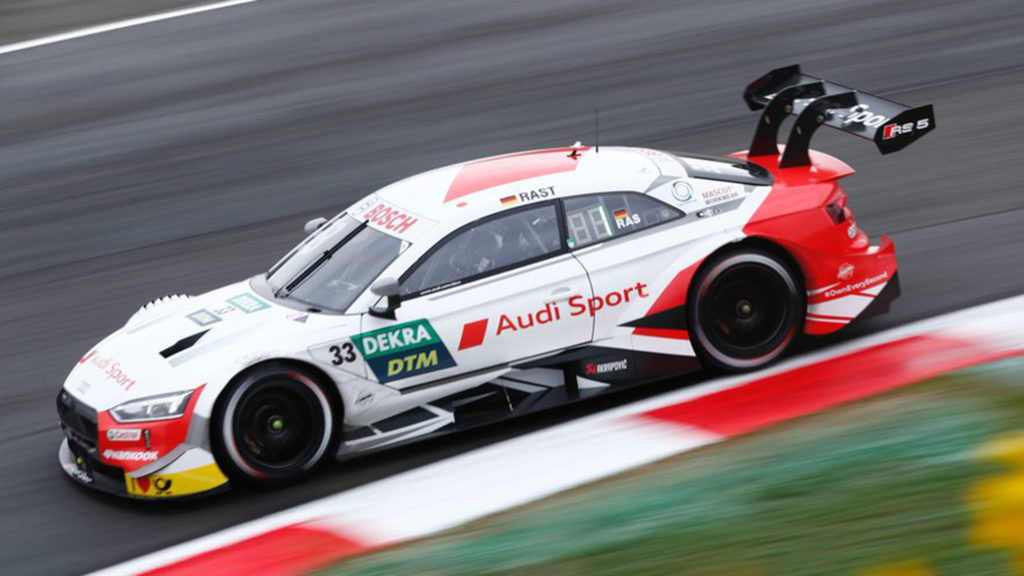 Wittmann pitted at the end of lap 25, with Rast following suit. The Team Rosberg mechanics had trouble with the front right tyre and the 2017 champion lost time in the pit as a result. Rast retired four laps later with a mechanical failure.

Rast said: “I lost engine power, we have to analyse what it is. We decided to stop before flooding the track with oil. I was fine up to the safety car, so we have to see what happened.”

After all drivers had completed their mandatory pit stop, Eng was leading the race ahead of Eriksson and Müller. Rockenfeller continued to move through from the back of the pack, overtaking Green for fifth position on the penultimate lap.

Müller increased the pressure on Eriksson on the last lap, with the Swede going airbone and jumping the chicane, managing to stay ahead.

At the chequered flag, Eng took his first ever DTM win, with Eriksson fending off Müller until the last moment to finish second.

Team Phoenix drivers Duval and Rockenfeller completed a recovering race to finish fourth and fifth, with Green next in the classification.

Wittmann’s strategy didn’t work in the end, with the championship leader in seventh, ahead of the two surviving Aston Martin Vantage DTMs of di Resta and Ferdinand Habsburg, who scored his first ever points in the DTM. Spengler completed the top ten.

Wittmann still leads the drivers’ table with 43 points, just three ahead of Eng and six over Müller.

Next for the DTM will be the qualifying session for Race 2, scheduled for Sunday morning at 10:25 CEST.