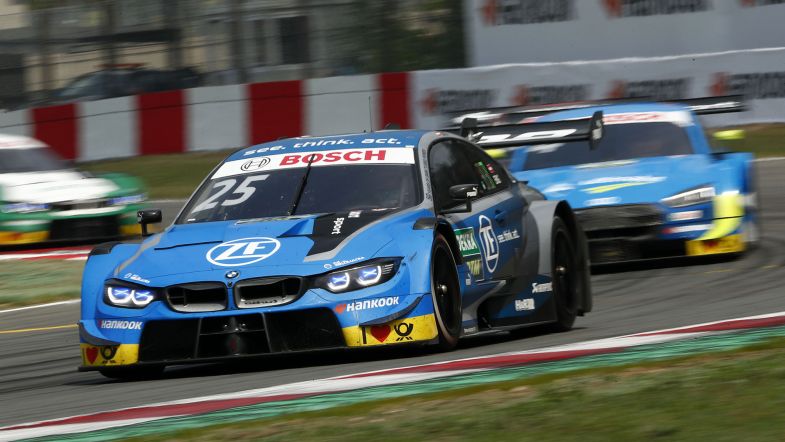 BMW Motorsport Team RBM driver Philipp Eng was the best scoring driver at Zolder for the second DTM round, achieving his first ever victory in the series on Saturday and taking second place on Sunday. Despite him claiming the championship lead, Eng refuses draw any conclusions for the rest of the year.

“We are happy to take the 19 points and the overall lead, even though it is nothing more than a snapshot,” said Eng.

Eng qualified in third place for the second race and was able to overtake Audi Sport Team Rosberg’s René Rast for second place at the start, but went wide at Turn 2, going side-by-side with Audi’s Robin Frijns and eventually falling behind the Dutch.

“It was one of the toughest races in my career,” said Eng. “After a good start, I made a mistake on turn two and drove straight on. I then had to battle for my position.”

Eng pitted on lap nine and continued gaining ground, but by the time he reached second place, Rast had already built a gap at the front and, with worn tyres, the Austrian had to defend from team-mate Sheldon van der Linde.

“The result shows that we have done a very good job in the first four races. I can only thank everyone at BMW Motorsport and my team for having such a reliable and fast car,” added Eng.

The Austrian leaves Zolder as championship leader with 59 points in his account, five over Rast and 16 ahead of fellow BMW driver Marco Wittmann. In the manufacturers’ table, Audi Sport leads with 213 points, 27 ahead of BMW Motorsport. Aston Martin is third with 15 points.

“After two race weekends in the 2019 DTM season, we can be very satisfied,” said Rudolf Dittrich, General Manager of BMW Motorsport Vehicle Development.

“We have reached pole position in all four races so far, we have won two races and recorded a total of four podiums. After the two races in Belgium, we are now leading the drivers’ standings with Philipp. We are aiming to build on that at Misano in two weeks.”