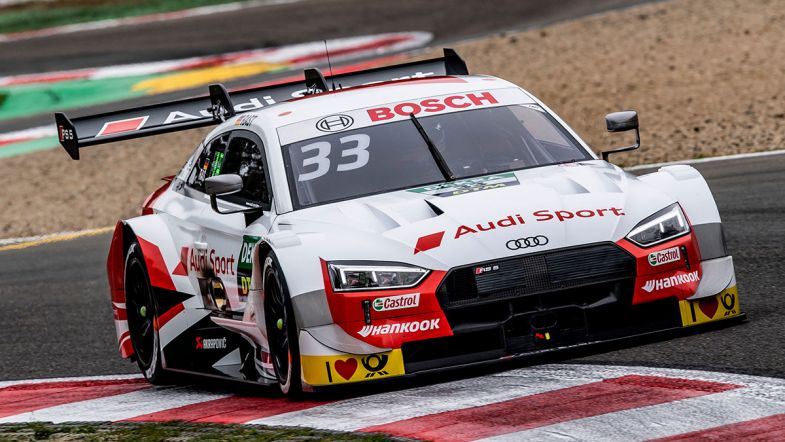 René Rast made the most of an incident-packed second DTM race at Zolder to take his second victory of the season. The Audi driver won the race ahead of yesterday’s winner and BMW driver Philipp Eng, with Audi Sport Team Rosberg team-mate Jamie Green in third.

R-Motorsport decided to retire Paul di Resta before the start of the race as a precaution as his Aston Martin Vantage DTM suffered an oil pressure issue during qualifying.

Contrary to the weather forecasts for the weekend the race took place in dry and sunny conditions, albeit with strong cross winds.

Eng, WRT’s Pietro Fittipaldi and Audi Sport Team Abt Sportsline’s Nico Müller came for their mandatory pit stop at the end of lap eight. Frijns and Glock pitted a lap later, with the BMW driver undercut by Eng. But Frijns fought back to the Austrian and managed to overtake back at Turn 6.

Rast overtook van der Linde at Turn 1 on lap 11, with the 2017 champion then opening a gap.

Wittmann was the new race leader, performing his mandatory stop at the end of lap 16, still with over half an hour left to be run of the race. The championship leader returned to the track just behind Glock with much fresher tyres and nine seconds behind Rast, the leader among those who hadn’t pitted yet. 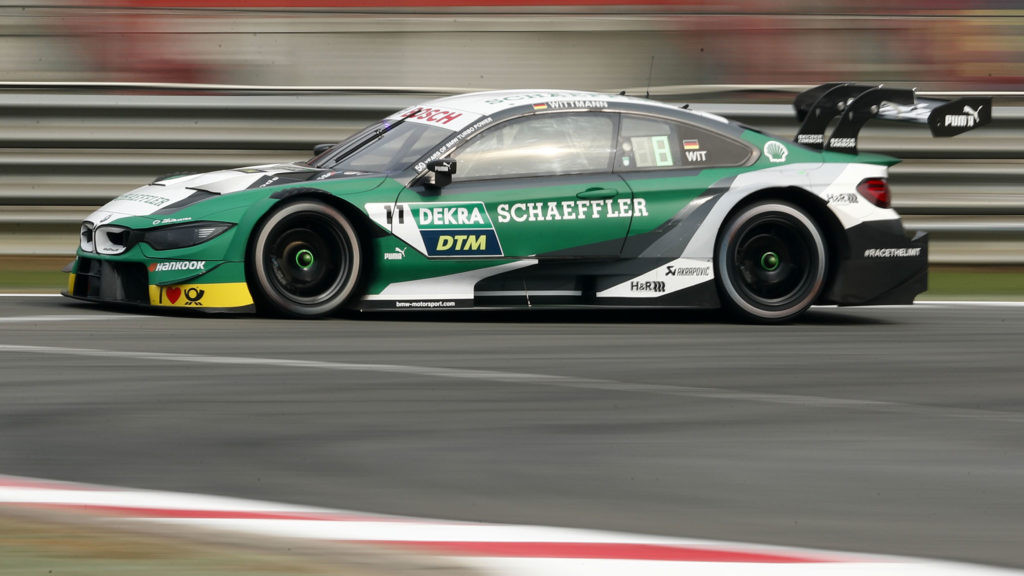 Wittmann made an important overtaking move on Glock for sixth place on lap 21. He went for a similar move on Frijns a lap later, tagging the Dutch at Turn 1 and sending Frijns into a spin. The safety car was called into action, with all remaining drivers performing their mandatory pit stop.

Half of the field took advantage to mount fresh tyres for the second time in the race, as Wittmann claimed through the radio that Frijns was sliding and he couldn’t avoid the Dutch.

Rast kept the lead at the restart, with Eng taking second place. Wittmann was went across the gravel at Turn 3 as he got a drive-through penalty for the incident with Frijns.

The race distance was increased with two further laps due to the safety car period to the benefit of the drivers pitting late, with Audi Sport Team Rosberg’s Jamie Green the highest placed among them in seventh position.

R-Motorsport’s Jake Dennis attacked Glock at Turn 1 on lap 29, with Green going for the inside and overtaking both of them to climb up to fifth position.

Rast started to feel the effects of tyre wear, cutting through the chicane on lap 30. Further behind.

Green overtook Rockenfeller on lap 32 to claim fourth position. Dennis, in seventh place, was eyeing Glock and overtook him for sixth place with three laps to go, with Spengler also taking advantage of the move to overtake his team-mate. Glock, without DRS and push-to-pass, lost ground to the pack, falling down to 14th place.

At the chequered flag, Rast took his second win of the season, with Eng coming home in second. Green managed to overtake van der Linde at the chicane for third place toward the end of the race, with Rockenfeller also going through. The South African finished fifth.

Dennis scored his first points of the season in sixth place ahead of Spengler, Müller and Pietro Fittipaldi. BMW driver Joel Eriksson completed the top ten.

Rast said after the race: “If we just win every second race it will be enough. The team built the car from scratch last night, so big credit to them as the car was great. I’m impressed by the engineering crew, they did a great job.”

After this race, Eng leads the standing with 59 points, five ahead of Rast and 16 over Wittmann, with Rockenfeller just one point behind in fourth position.

The next round of the DTM takes place at Misano in Italy on June 7-9th.