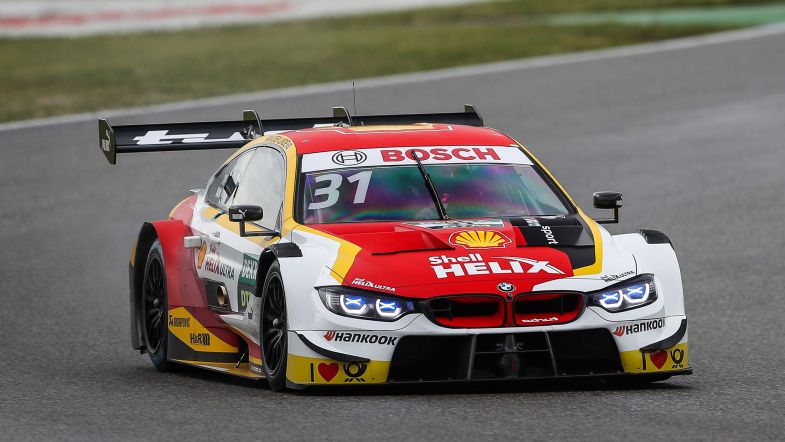 The session had to be red-flagged as Paul di Resta stopped on the track with no power in his Aston Martin Vantage DTM.

Van der Linde clocked the fastest lap time on his first run, but went wide at Turn 4 right afterwards, causing a yellow flag. The South African was able to return to the pits under his own power, with the RBM mechanics fast at work to clean the gravel and debris from his M4 DTM’s floor.

The entire field returned to the track with six minutes to go, but their attempts were spoiled as di Resta stopped at Turn 2 with no power in his Aston Martin Vantage DTM, a repeat of yesterday’s retirement issue for team-mates Daniel Juncadella and Jake Dennis.

Rast returned to the pits and parked his Audi RS 5 DTM at the parc fermé, giving up on the chance to improve his lap time, also joined by fellow Audi drivers at Team Phoenix Mike Rockenfeller and Loïc Duval.

The session was restarted with three and a half minutes left on the clock, with few drivers able to improve their lap times, particularly in sector three.

Van der Linde’s lap time of 1:21.590 stood as the fastest lap time of the session, with the young rookie scoring his maiden pole position in the series, with Rast just six-thousandths of a second behind. Yesterday’s winner Philipp Eng, from BMW Team RBM, was third, 0.124 seconds off the pace.

BMW Team RMG’s Timo Gluck was fifth, ahead of Rockenfeller, already half a second off the pace, with BMW Team RMG’s Marco Wittmann just nine-thousandths behind the 2013 champion.

Van der Linde said after the session: “I still can believe it, it’s just my fourth race in the DTM, already in pole position, I’m super, super happy, thank you so much to the team.”

Jake Dennis was the fastest in the R-Motorsport camp, placing his Aston Martin Vantage DTM in 13th place, 0.973 seconds off the pace.