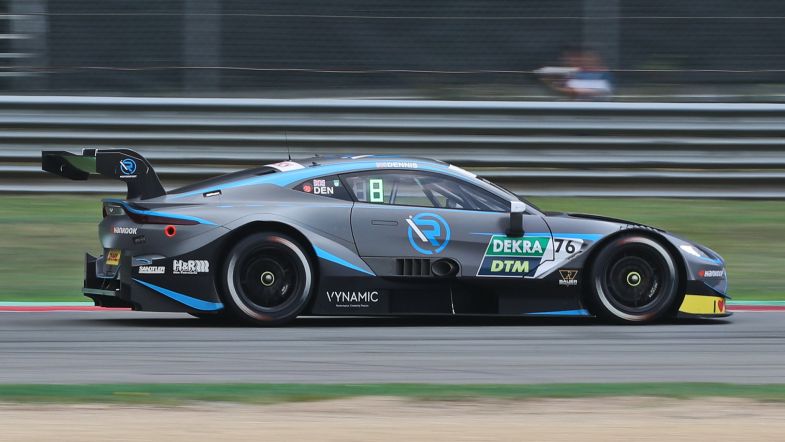 R-Motorsport had a tough day at Zolder on Sunday, with three of their Aston Martin Vantage DTMs suffering technical problems.

Jake Dennis turned the team’s fortunes around however, driving a consistent race to finish sixth and score his first points in the DTM

Sunday started with more bad news for R-Motorsport as they carried out an engine change on Dennis’ car after Saturday’s problems and, in the qualifying session, Paul di Resta had to stop his car on track due to an engine issue, with the team choosing to withdraw the Scot from the race in order to study the situation.

Ferdinand Habsburg had to retire with mechanical woes, with Daniel Juncadella going off track before retiring himself with brake problems.

That left Dennis to fly the Aston Martin flag and tried an alternative strategy, pitting for fresh tyres as late as possible; one of the last few to do so on lap 22. The Briton returned to the track in eighth place and was able to challenge BMW Team RMG’s Timo Glock, overtaking for sixth place with just three laps to go.

“I managed to maintain my tyres on the first stint, as I had to drive a long time on them and then had a fresh set left for the sprint to the finish,” said Dennis. “No DRS made life pretty difficult for me in the closing stages, unfortunately. The guys behind chasing me still had it, so I was happy to take the chequered flag in P6.”

The first points for the Briton in the DTM also brought a sigh of relief: “That is a great way to finish my second race weekend in the DTM. We knew we could do well in this race with our strategy.”

Due to the overnight engine change, R-Motorsport wasn’t able to accrue the points in the manufacturers’ championship. Still, team principal Dr. Florian Kamelger had a positive take on Sunday’s action: “Jake showed amazing fighting spirit today and achieved what was possible in sixth. Excellent pit stop timing helped him with that.”

Kamelger stressed that these are early days for R-Motorsport, highlighting the lack of development as the underlying cause for the Aston Martin Vantage DTM’s woes.

“We saw from the race that we still need time to make our technology package a success, as Paul had technical problems, unfortunately, and couldn’t start,” he said. “Ferdinand and Dani also had issues which we have not yet had chance to look at. We still lack development time, but we intend to work our way forwards together, step by step.”

The team is believed to be able to carry the extra two days of testing they weren’t able to have in the winter, and allowed by ITR and their fellow manufacturers in the DTM, in the weeks prior to the third round of the season at Misano, in three weeks’ time.