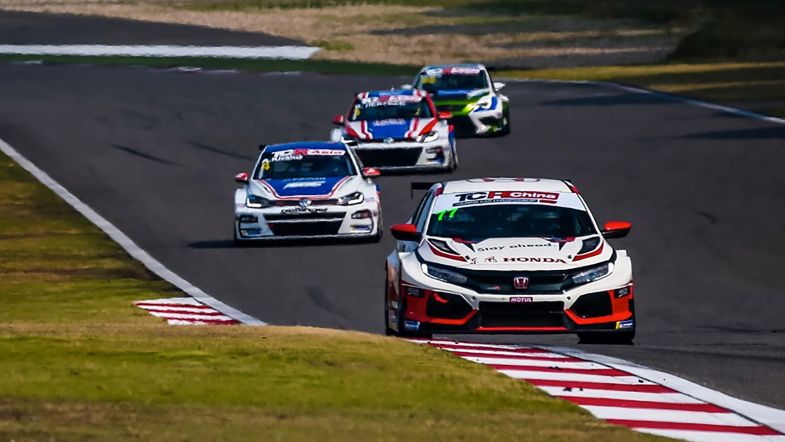 Dan Lloyd won the first race of the weekend at Shanghai in his Dongfeng Honda MacPro Racing Civic TCR, winning in the TCR China championship classification, while Luca Engstler wrapped up his fourth win of the TCR Asia series with second overall.

Martin Xie led the way at the start in the #55 Honda Civic ahead of Lloyd, while Luca Engstler leapt from fifth to third overall in his Engstler Motorsport Hyundai ahead of his team-mate Diego Moran, and Sunny Wong’s Teamwork Motorsport Audi RS 3 LMS.

However, it was Pepe Oriola who made the best start of all from ninth in his Solite Indigo Racing Hyundai, and was already up to fifth at Turn 1, before passing Moran’s Hyundai at Turn 6,

Further behind at Turn 6, Alex Hui’s race came to an end in the second of Teamwork’s Audis, after he was hit by the NewFaster Racing Cupra TCR of Alex Liu.

On lap three, Diego Moran briefly moved back up to fourth overall, passing Oriola’s i30 N TCR, but the Spaniard managed to get back in front of the Ecuadorian using the switchback and then began to pull away.

Up front, Dan Lloyd looked clearly frustrated trapped behind team-mate Xie and made two consecutive attacks at the first corner on laps four and five, before taking the lead on lap six, with Engstler taking the opportunity to make his was past up to second.

Xie was then left to defend against Oriola’s Hyundai for the remainder of the race, with Oriola making his way past on lap eight, but Xie retook the position, diving down the inside at Turn 1 and managed to hold on to third overall until the end.

Lloyd and Engstler’s victories see them both extend their lead in the TCR China and Asia points standings respectively.

Race 2 takes place on Sunday at 9:45 CST (03:45 CEST) with Alex Liu in the NewFaster Racing Cupra TCR set to start from pole position.