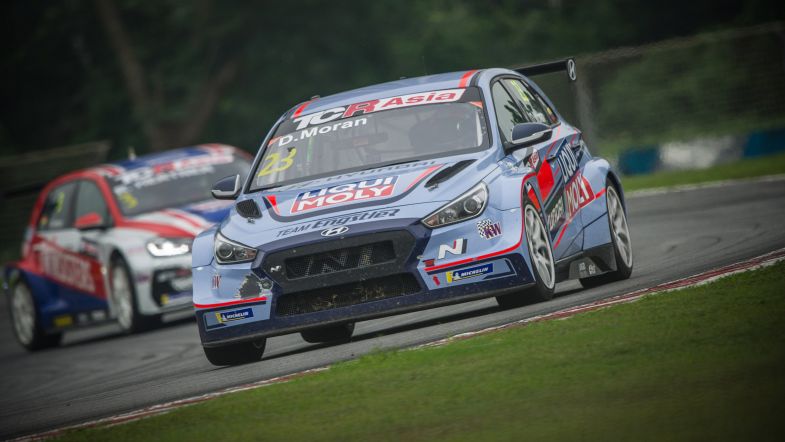 Luca Engstler’s team-mate Diego Moran took his second victory of the season, and his first in the Engstler Motorsport Hyundai after starting the year with the Volkswagen, in the second race at Zhejiang. In doing so, the Ecuadorian remains the only other contender for the title, with Pepe Oriola now out of contention.

Daniel Miranda started from pole position for the reversed grid race in his Eurasia Motorsport Hyundai, and led into Turn 1 ahead of Martin Xie’s Dongfeng Racing Honda and the Solite Indigo Hyundai of Pepe Oriola.

Xie then took the lead, but was soon tipped into a slide by Miranda’s Hyundai at Turn 3, then allowing Moran into the lead from third place, while Oriola took the opportunity to charge up to third, passing Miranda’s slowed-down Hyundai.

Just behind, TCR China class leader and yesterday’s race winner Huang Chu Han moved up to fourth in his NewFaster Audi, with Luca Engstler’s Hyundai just behind him.

Oriola made a mistake while battling Xie for second at the final turn on lap one, and dropped back behind Miranda, while Xie’s Honda slowed down entirely with a mechanical issue and was soon in the pits.

Oriola didn’t take long to repass Miranda, and was soon back ahead and now up to second, but Moran’s Hyundai was now long gone in the distance.

On lap three, Engstler passed Miranda and Huang to move up to third and was soon battling Oriola for second, with the two drivers tussling for position for the best part of the race, allowing Moran to even further improve his lead.

They battled until lap 11, when Engstler made a mistake at the final corner and briefly dropped behind Huang’s Audi. Engstler soon retook the place, but Oriola now had gained some breathing space.

Moran went on to win the race by ten seconds from Oriola, with Engstler completing the podium.

Zhang Zhen Dong finished in the top ten with the new MG XPower MG 6, though as the car doesn’t have official TCR homologation as yet, isn’t eligible for points.

The TCR Asia series season finale is next up at Bangsaen in Thailand on September 1st, while the next TCR China championship race joins the WTCR field at Ningbo on September 15th.