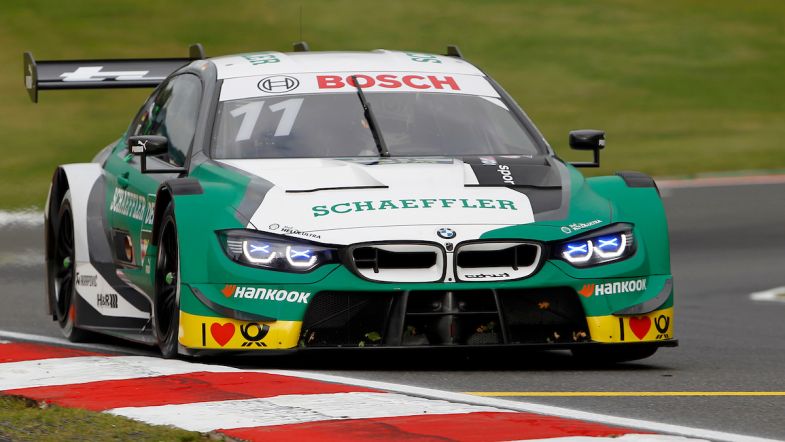 BMW Team RMG’s Marco Wittmann scored pole position in Saturday’s qualifying session at Brands Hatch, in a session marked by the accidents of both WRT drivers and where the weather was again playing a big role.

The field ventured onto the wet track on rain tyres and, after a first evaluation lap, some drivers changed to slicks.

The first victims of that move were the WRT drivers, both going off the track and with Pietro Fittipaldi hitting the barriers hard at Turn 1. His Audi RS 5 DTM sustained severe damage, with the barriers also in need of repairs. The session was red-flagged just as team-mate Jonathan Aberdein went off into the gravel. Both drivers were out of the session, fortunately unharmed.

WRT’s team principal Vincent Vosse said: “We were pushing on that lap as it was the last chance before returning to wets. We will repair the cars and see what we can do.”

The session was restarted with 14 minutes left on the clock, with drivers eager to return to the track as most had their first run interrupted with the red flag.

Championship leader René Rast changed to slicks not long after, as team-mate Green came for fresh tyres, returning to the track for a last attempt.

The sun started to shine over Brands Hatch for the last four minutes of the session, with all drivers improving their lap times.

Rast rose to the top of the time sheets, but Wittmann would take the pole position, beating the Audi driver by 0.069 seconds.

Jake Dennis was seventh in the end, ahead of Audi Team Abt Sportsline’s Nico Müller. BMW driver Timo Glock was ninth, with R-Motorsport’s Daniel Juncadella completing the top ten, nine-tenths off the pace.

Wittmann: “It feels good but it was super tricky. The track was half-half and i wasn’t sure about going on slicks. We did and the time came in the end. Being on pole is always good, specially in a track like this where overtaking is difficult.”

Rast: “Maybe I was a bit too early on the slicks, but we played safe. We got some good points for the championship and let’s see how it goes.”