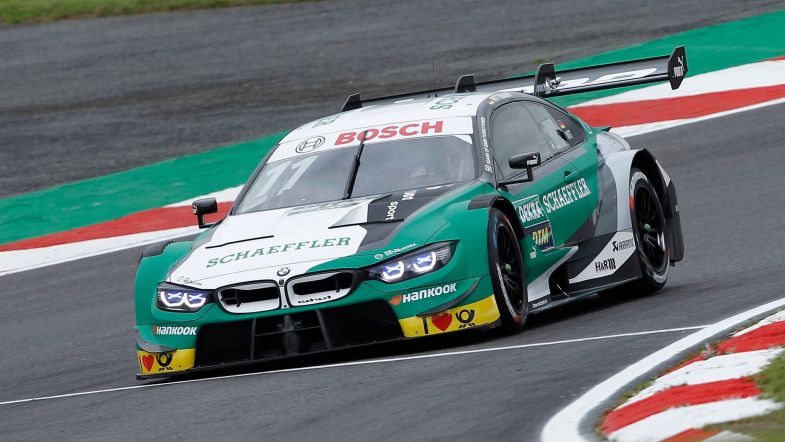 WRT’s Jonathan Aberdein had started the race from the pit lane after his accident in qualifying, whilst BMW Team RBM’s Joel Eriksson couldn’t start the race at all due to engine problems with his M4 DTM.

R-Motorsport’s Paul di Resta made a blistering start from fourth on the grid in his Aston Martin Vantage DTM to take the lead at the start, followed by BMW Team RMG’s Marco Wittmann and Audi drivers Loïc Duval and Rast. Di Resta would however soon receive a five-second pit stop penalty for a jump start after his car was deemed to have been crawling before the lights went out.

Fellow Aston Martin driver Jake Dennis had to retire at the end of the first lap with damage to his rear wing after he was hit by BMW Team RMG’s Timo Glock at the start, who had been pushed into the Briton by the other Aston Martin of Daniel Juncadella. Juncadella was given a drive-through penalty for his part in the incident.

Di Resta was able to successfully defend from Wittmann, who had to drop back slightly from the Scot in order to cool his M4 DTM. That put him under pressure from Duval but the Frenchman soon gave way to Rast, after Müller pitted at the end of lap 13.

Wittmann was the first of the leaders to pit, at the end of lap 16, with Rast and Duval following suit a lap later. Rast returned to the track ahead of Wittmann after a slow tyre change, but the BMW driver overtook for the virtual lead of the race, coming between Rast and Green at Turn 1, with Müller also overtaking Rast.

The two Audi drivers continued fighting each other, allowing Wittmann to build a gap.

The entire field had completed their compulsory pit stop by lap 25, with Wittmann leading the race ahead of Rast and Müller. Green had to complete a second pit stop with 16 minutes left on the clock, with the Team Rosberg driver enquiring with his team whether it was possible that all drivers would have to go for a two-stop strategy. 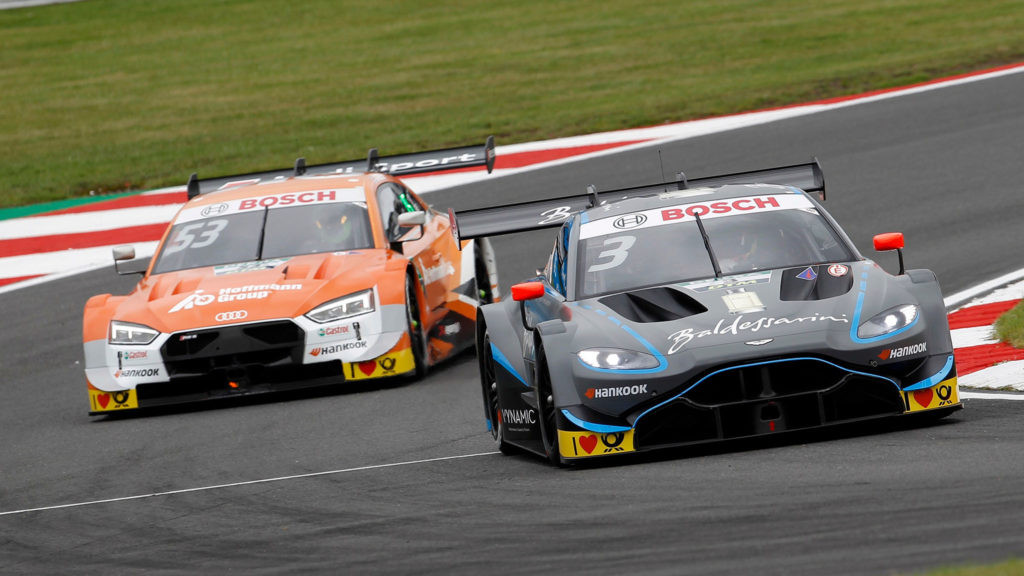 Positions at the front remained stable, with the battles in the later stages taking place near the back as Audi Sport Team Abt’s Robin Frijns, the last driver to have changed tyres, closed the gap to Team Phoenix drivers Duval and Mike Rockenfeller. The Dutchman overtook both drivers over two laps to climb up to fourth position.

The Team Phoenix pair soon fell into BMW Team RBM’s Philipp Eng’s grasp, with the Austrian overtaking Rockenfeller for sixth place on lap 38. Duval defended from Eng’s attacks until the end of the race.

Di Resta was having a quiet race, losing eighth position to BMW Team RBM’s Sheldon van der Linde with five minutes to go, but had to retire two laps from the end of the race with a mechanical problem.

Wittmann’s tyres dropped off in the closing stages of the race, with Rast quickly closing the gap to the BMW driver. However, Wittmann held on until the chequered flag and took his fourth win of the season, barely three-tenths ahead of Rast, with Müller completing the podium.

Frijns was fourth, followed by Duval and Eng, with Rockenfeller in seventh place. Van der Linde finished eighth, with Aberdein making his way from the back of the pack to finish ninth. Juncadella completed the top ten.

After this race, Rast leads the championship on 178 points, with Müller two points behind. Wittmann closed the gap to 32 points.

The DTM returns to action at 11:00 CEST on Sunday morning for the second qualifying session.