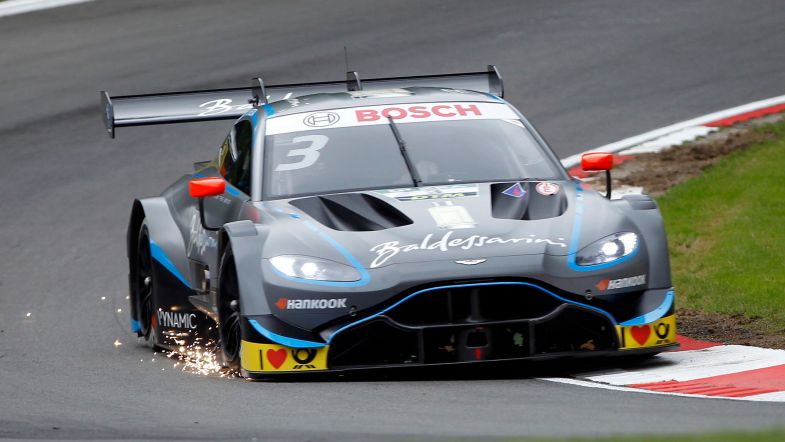 R-Motorsport driver Paul di Resta had a sweet and sour day at Brands Hatch, having to retire after leading the first part of the race. There was controversy surrounding di Resta’s race as he received a penalty for jumping the start, something the Scot insists he did not do.

At the start of the race, di Resta made the most from his competitors being slow off the blocks to take the lead of the race from fourth position on the grid. But the stewards would rule that the Scot had jumped the start.

“I’m convinced that I didn’t make a jump start,” said di Resta after the race. “Anyway, it was a great feeling to be leading the first 15 laps of the race in an Aston Martin Vantage DTM in front of all the British fans.”

Di Resta defended from BMW’s Marco Wittmann to lead the first 15 laps of the race, right until his pit stop, when he also completed a five-second pit stop penalty for jumping the start.

The Scot returned to the track in 11th place, recovering up to sixth position. But the Aston Martin driver later dropped to eighth after not being able to withstand the attacks from Audi’s Robin Frijns and BMW’s Philipp Eng.

Di Resta’s worst woes would come three laps from the end of the race, as he retired due to a technical problem.

“I felt a total loss of power towards the end of the race,” said di Resta. “That’s why I parked the car in the garage to be on the safe side. Although we once again had a reliability problem here, we know that things are on the up.”