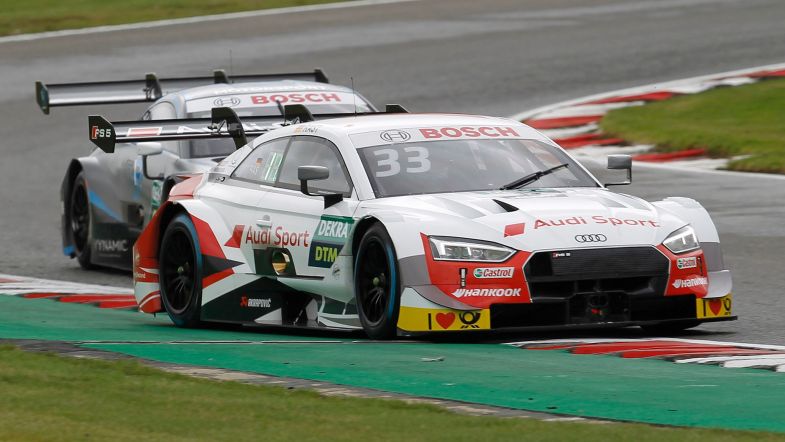 Audi Sport Team Rosberg driver René Rast drove a faultless race on Sunday at Brands Hatch to claim his fourth victory of the season, leading an Audi 1-2-3-4 in the race. BMW driver Marco Wittmann tried to climb the order with a two-stop strategy, but could only manage tenth place.

At the start, Audi Sport Team Phoenix’s Loïc Duval jumped ahead of pole-sitter Rast, who also came under fire from Team Abt Sportsline’s Robin Frijns, who in his turn was under investigation for an inaccurate grid position.

Duval let both Rast and Team Abt Sportsline’s Nico Müller through on the second lap, with the first two classified drivers in the championship now leading the race.

Further back, BMW Team RMG’s Marco Wittmann was already up to eighth position, as Team Rosberg’s Jamie Green got a five-second pit stop penalty for an inaccurate grid position. The Briton came in at the end of lap seven, complaining via radio that he had been stopped longer than five seconds.

Wittmann came for his obligatory pit stop at the end of lap nine, as the Team RMG driver was stuck behind fellow BMW driver at Team RBM Philipp Eng, unable to attack the Audis ahead of him.

Müller closed the gap to Rast, with both pitting at the same time at the end of lap eleven. Team Abt Sportsline with Müller’s left rear tyre and he to the track just ahead of Wittmann.

Team Phoenix’s Mike Rockenfeller pitted a lap later, with the mechanics releasing the car just ahead of BMW’s Timo Glock, to return to the track in front of Wittmann, who lost contact with Müller as Rockenfeller was warming up his tyres.

Positions remained stable, with BMW drivers Eng and his team-mate Sheldon van der Linde on the lead as they hadn’t pitted, and with Rast in the virtual lead of the race, with Wittmann a virtual sixth. Eng continued lapping competitively, matching Rast’s lap times.

BMW driver Joel Eriksson’s weekend from hell continued, with the Swede retiring next to the pit wall on lap 20 with a mechanical issue. Race control activated a slow zone where the car was parked and Wittmann took advantage of this to make a second pit stop, in order to face the last part of the race with fresher tyres than the Audi rivals ahead of him.

BMW’s tyre strategy started to pay off as Eng closed the gap and attacked Rockenfeller on lap 27, overtaking for fifth position and with Duval as his next target.

The battle lasted for several laps, with Duval making his RS 5 DTM as wide as possible. This allowed Rockenfeller, WRT’s Jonathan Aberdein and van der Linde to close the gap to the pair.

At the front, Müller closed the gap to Rast down to just half a second with ten minutes to go, but was unable to get close enough to attack the Team Rosberg driver.

Rast took his fourth win of the season at the chequered flag, with Müller in second place and Frijns completing the podium.

After the races at Brands Hatch, Rast has increased his lead in the championship with 206 points, 37 ahead of Müller and 59 over Wittmann.

The next round of the DTM takes place in two weeks’ time at the Lausitzring.