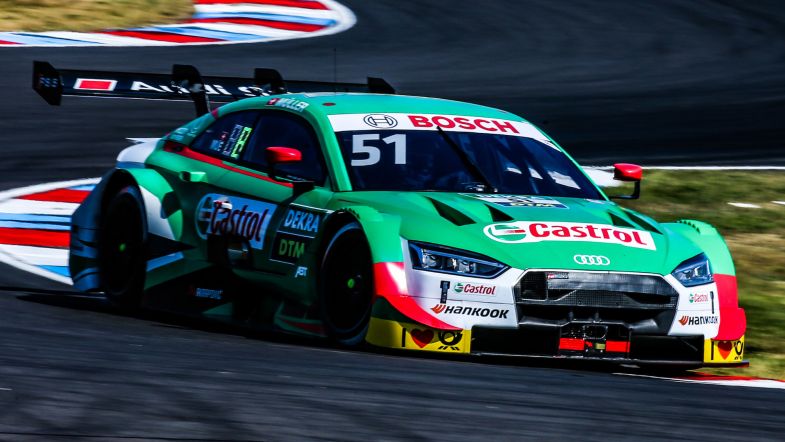 Nico Müller claimed his second DTM victory of the season in the first race at the Lausitzring on Saturday, making a huge leap in the championship standings after main rival René Rast retired.

The Swiss driver inherited the lead on lap seven when Rast was forced to retire from the lead with a loss of engine power and power steering.

Rast started from pole position and led the first few laps until his Audi Sport Team Abt Sportsline car slowed in the first corner complex. He initially recovered but was forced to pit and prematurely end his race shortly afterwards.

Thereafter, Müller, who had been closely trailing Rast in the opening laps, remained out front until the chequered flag to secure his first win since the second race at Misano.

It also marked not only his first victory at the Lausitzring but his first podium at the east German track.

He closes Rast’s championship lead to 14 points, building his own points total to 195 compared to Rast’s 209, which included three points gained for pole position.

Robin Frijns finished second despite a slightly slow pit stop to give Abt Sportsline a one-two result after surviving a late-race charge from Mike Rockenfeller, whose Audi Sport Team Phoenix car had been lapping quicker than the cars ahead in the last few laps.

This was enough to get Rockenfeller past Marco Wittmann’s BMW M4 DTM, forcing the BMW Team RMG driver, who made a rapid start off the grid to jump from fifth to third, to settle for fourth at the line.

Jamie Green showed impressive pace early in the race but he was handed a drive-through penalty for an unsafe release in the pit lane, which had put him directly into the path of Joel Eriksson and Timo Glock.

Rockenfeller benefitted from Green’s unsafe release, meanwhile, making a position on the Brit when he was forced to slow to avoid the two BMWs.

Philipp Eng made his way past Loïc Duval late in the race to secure fifth, while Pietro Fittipaldi finished behind the pair, in seventh.

Jake Dennis was the most successful R-Motorsport driver, crossing the line 11th directly ahead of his team-mates Daniel Juncadella and Paul Di Resta.

This meant that none of the four Aston Martin Vantage DTMs finished within the points, although the team was unable to score any manufacturer points anyway as a penalty for breaking seals on all four engines after qualifying.

Team principal Dr Florian Kamelger explained prior to the race that the seals were broken to solve ‘issues’ but wouldn’t give any specifics.