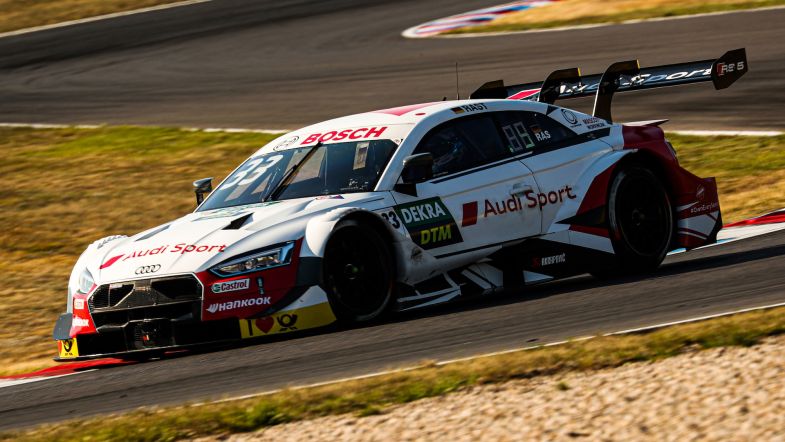 The championship leader bagged an additional three points for his sixth pole of the season despite placing midway through the field for most of the 20-minute qualifying session.

His qualifying time of 1:35.241 was logged on his penultimate lap with less than a minute on the clock, after his early efforts had only put his Audi Sport Team Rosberg car eighth on the timing screen.

“I pushed a bit too hard with the first set [of tyres], I expected a bit more grip off the track and I pushed too hard and overdrove the car,” Rast explained.

“I made too many mistakes with the first set and then I was just P8. I had a bit of pressure because Marco [Wittmann] and Nico [Müller] were just ahead of me.

“I knew I had to nail a lap and the one lap I did was quite clean. Not perfect, but clean.”

Mike Rockenfeller had looked set to start from pole for the first time in four years after initially going quickest with his Team Phoenix-run Audi RS 5 DTM, but he dropped back to sixth when the final flurry of times came in.

Jamie Green, who set the pace in Friday afternoon’s Free Practice 2, will line up alongside Rast for this afternoon’s race, giving Team Rosberg a one-two result by a margin of 0.045 seconds.

The two Audi Sport Team Abt Sportsline cars of Nico Müller and Robin Frijns will occupy the second row of the grid, ahead of Marco Wittmann in the fastest of the BMW M4 DTMs in fifth.

Pietro Fittipaldi qualified seventh in his customer Audi Sport Team WRT entry despite his right-side door coming loose during a flying lap, forcing him to pit to rectify the problem.