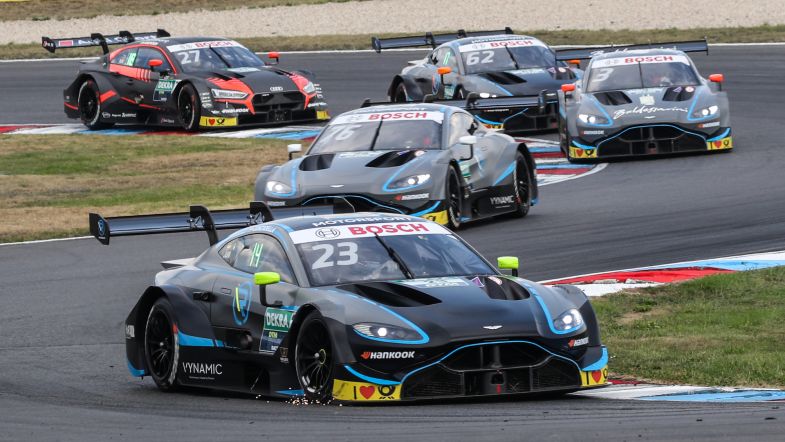 Unexpected levels of tyre degradation on R-Motorsport’s Aston Martin Vantage DTMs was partly to blame for a disappointing race at the Lausitzring on Saturday, according to its team principal and drivers.

The Swiss team’s quartet of Aston Martins finished eleventh, twelfth, 13th and 15th, bringing back no points for the fifth time this season following an upturn in fortune in recent races.

While part of these results was put down to technical issues and a drive-through penalty, team principal Dr Florian Kamelger says that the roval course and the demands it puts on tyres proved a challenge for the Aston Martins.

“The track’s characteristics did not really suit our package, and as a result, not even the tremendous efforts of Jake [Dennis] and Daniel [Juncadella] out on track were able to ensure a points-scoring finish,” he said.

“We must now analyse the data from the race to find where we can improve tomorrow.”

Ferdinand Habsburg, whose drive to 15th was hampered by a drive-through penalty for a jump start, added that the team had expected heavier tyre wear for the Audis and BMWs.

“We had anticipated heavier tyre degradation for our competitors, which was the case in the practice sessions,” he explained. “However, it didn’t happen in the race, so I lost a lot of time during the first stint.”

Dennis, whose eleventh-place finish from 13th on the grid made him the most successful R-Motorsport driver on Saturday, believes the team achieved all it could from the difficult conditions.

“We weren’t on top of our tyre management as we usually are,” he said. “We really suffered a bit with degradation.

“P11 is pretty close to the points, but I don’t think that much more would have been achievable for us today even if we’d had a trouble-free race.”

Dennis engaged in a battle for position with Juncadella, who ultimately came home twelfth and explained that his poor qualifying performance was caused by a broken damper and improperly balanced tyres.

This led to “a lot of vibration” early in the race, when Juncadella used the tyres from his second qualifying run prior to pitting and vastly improving his pace.

“My speed was much better after the pit stop and I was able to match the pace of drivers in the Top Ten,” he explained. “Unfortunately, I lost too much time at the start.”