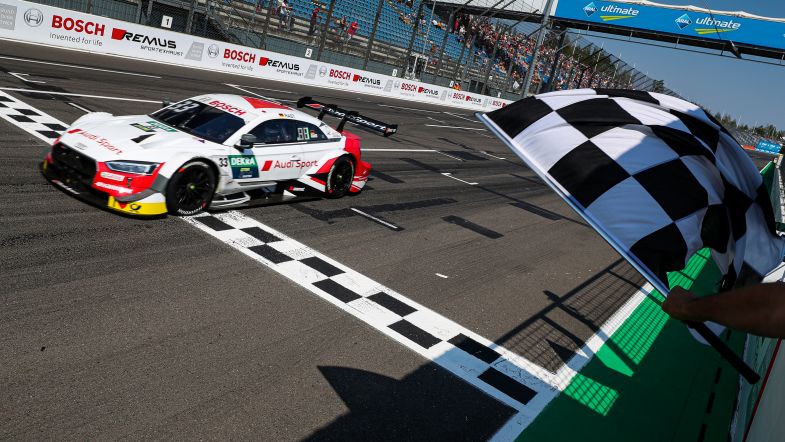 Audi’s head of motorsport Dieter Gass says that the Audi RS 5 DTM has proven to be “the car to beat” throughout the first season of DTM’s new turbo era after clinching the manufacturer’s title on Sunday.

Gass praised Audi’s employees and its partner teams for the feat, which sees the Ingolstadt-based brand secure an insurmountable lead in the manufacturers’ standings with four races to go.

“Audi has now won three of the last four manufacturers’ titles in the DTM,” said Gass. “That’s a strong performance and shows the high level our entire squad has been working on for years.

“This includes our drivers, our teams, our partners and every individual involved in the DTM project. Clinching the manufacturers’ title so early and with such a big advantage shows that we’ve simply been delivering a mega season so far.

“I think that even four races before the end of the season, it’s fair for us to say that our Audi RS 5 DTM has been the car to beat this year and that we’ve also built an extremely strong and efficient engine.

“The fact that this engine concept can be found in a very large number of Audi production models worldwide, too makes this title win all the more valuable.

“The manufacturers’ title also belongs to all employees at Audi who work for our brand day in day out with heart and soul.”

All eight of Audi’s cars, including the two customer entries run by Audi Sport Team WRT, finished in the top-nine in Sunday’s 500th DTM race at the Lausitzring, capping off a vastly successful weekend for the manufacturer.

Its three factory teams are placed first, second and fourth in the teams’ standings, with Audi Sport Team Abt Sportsline’s lead aided by a one-two finish for its drivers Nico Müller and Robin Frijns on Saturday.

Audi Sport Team Rosberg is 25 points behind Team Abt Sportsline, with the two running on 335-310.

In the drivers’ championship battle, the contest is firmly between René Rast and Müller, each of whom won a race this weekend.

Müller, with a win on Saturday and runner-up finish on Sunday, has closed the gap to Rast, who now only has a 20-point advantage after his retirement in Race 1.

Rast came into the Lausitzring weekend with a 37-point lead over his rival from Team Abt Sportsline.

“Winning the 500th race in DTM history is very special,” Rast said. “A big thank you from me goes to the guys in the pit lane who worked up until the early morning hours and gave me a perfect car again.

“It’s also great that Audi, with an extremely strong result, has won the manufacturers’ championship early – we have the strongest package this year.”

Marco Wittmann held onto his third place in the standings with a fourth and sixth-place finish, but the two-time champion, currently the best-placed BMW driver, is a further 47 points behind Müller on 167.

Philipp Eng and Mike Rockenfeller are two points apart in the battle for fourth, while Robin Frijns, Loïc Duval, Bruno Spengler, Jamie Green and Joel Eriksson round out the top ten.