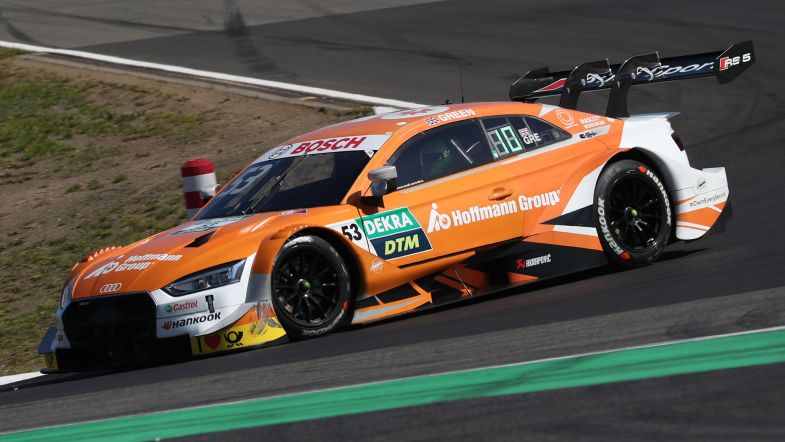 Audi Sport Team Rosberg Jamie Green beat his team-mate and championship leader René Rast by just one-thousandth of a second to take his second pole position of the year at the Nürburgring.

The result, with BMW’s Marco Wittmann in eighth place and Team Abt Sportsline’s Nico Müller in 14th place, means that Rast could clinch his second DTM crown in Sunday’s race.

The entire field took to the track at the green light but, after one evaluation lap, Paul di Resta returned to the pits with a problem, with the R-Motorsport mechanics frantically working on his Aston Martin Vantage DTM.

All drivers went back to the pits after their first run, returning to the pits with seven minutes to go for their last attempts. R-Motorsport however, couldn’t resolve the issue on di Resta’s car.

Green stole the top spot from his team-mate Rast with seconds left on the clock by just one-thousandth of a second, with the championship leader choosing to abort his final attempt.

Rockenfeller was third, but was under investigation for crossing the white line at the pit exit, with Team Abt Sportsline’s Robin Frijns in fourth position.

Team WRT’s Jonathan Aberdein produced another good performance to qualify in fifth position, with the second Audi from Team Phoenix in sixth place in the hands of Duval.

Team RMG’s Timo Glock was the fastest driver for BMW Motorsport in seventh place, albeit 0.238 seconds off the pace, with team-mates Marco Wittmann and Bruno Spengler right behind. Van der Linde completed the top ten.

The session was disastrous for Team Abt Sportsline’s Nico Müller, who was never close to the leading positions as he qualified down in 14th just ahead of Ferdinand Habsburg, who was the fastest driver for R-Motorsport in 15th position.

Green, asked if he would let his championship leading team-mate through, said: “This is a similar situation to Lausitzring. Obviously I’m an Audi driver and a team player, so I’ll see who’s behind me. But first I have to make a good start.”

After the qualifying result, Rast now leads with 264 points, with a 49-point margin over Müller. A victory in Race 2 would be enough for the Team Rosberg driver to secure this year’s title.