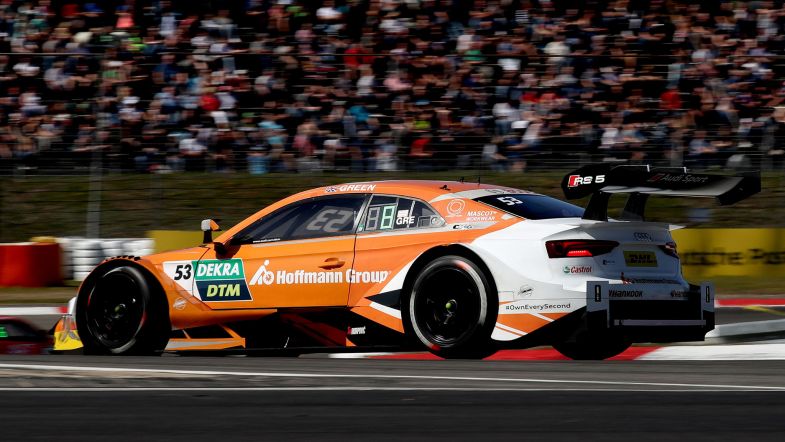 Audi Sport Team Rosberg had an almost perfect day at the Nürburgring, with Jamie Green taking his first win in almost two years, and most importantly with René Rast finishing third to claim the 2019 DTM drivers’ title.

At the start Rast overtook Green without much opposition to take the lead, with Team Phoenix’s Mike Rockenfeller and Loïc Duval next.

Team RBM’s Sheldon van der Linde got a drive-through penalty for pushing fellow BMW driver Timo Glock. His team-mate Marco Wittmann started well, but found himself in the middle of the Audi drivers, with the BMW driver only able to go up to seventh place in the initial stages of the race.

Further back, Rast’s title rival and fellow Audi driver Nico Müller was making progress through the pack, already up to ninth place at the end of lap six.

Green started putting pressure on Rast on lap ten. Rast pitted at the end of lap 12, with Green mirroring the move a lap later and managing to undercut Rast to claim the lead.

Rast tried to pass Green, with the Briton defending as his tyres warmed up to working temperature, with Green defending to maintain the lead. The strategies allowed Müller to close on the leading duo, coming up to the virtual fourth position of the race behind Duval.

Müller found himself unable to overtake Duval, with his team-mate Frijns overtaking the Swiss at Turn 1 on lap 24 for the virtual fourth position of the race.

Frijns was on the move, overtaking Duval for third a lap later, with a five-second deficit to Rast and lapping half a second faster than the Team Rosberg driver.

Wittmann went wide at Turn 2 on lap 26 due to technical problems with his M4 DTM. The Team RMG driver as able to restart the car and rejoin the race, albeit falling to 16th place. He was forced to retire from the race due to gear selection problems.

Meanwhile, Müller was caught by Rockenfeller and WRT’s Jonathan Aberdein. As the trio fought, they were able to reel in Duval. Aberdein attacked Rockenfeller at the chicane on lap 33, with the local hero defending from the South African.

Frijns closed the gap to Rast, coming to under three-tenths behind the Team Rosberg driver with eight minutes plus a lap left to be run. The Dutch overtook Rast at the chicane on lap 34 to take second place.

Aberdein overtook Rockenfeller and was on the offensive to attack Müller, who needed to keep his position to maintain a slim mathematical chance for the title. Aberdein overtook Müller for fifth place two laps from the end of the race. 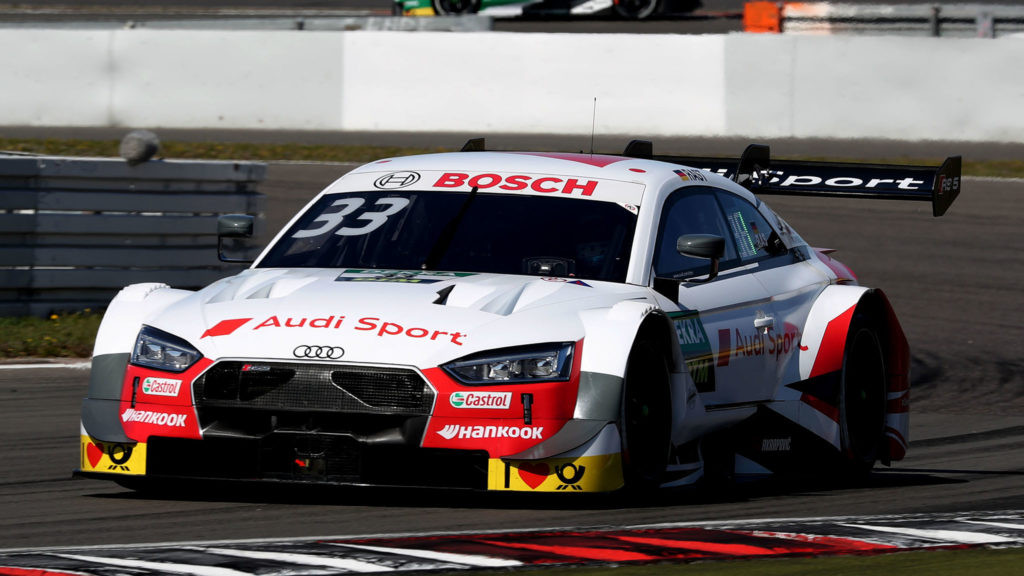 Frijns continued his progress and tried to overtake Green for the lead at the chicane on the penultimate lap, cutting the chicane and having to concede the position back to the Briton. Green took his first win of the year ahead of Frijns, with Rast in third place, enough for him to win the 2019 drivers’ title, his second DTM title.

Duval was fourth, followed by Aberdein and Müller, with Rockenfeller in seventh in an Audi 1-2-3-4-5-6-7 result.

Rast has 279 points in his account, 56 over Müller in second place. The next round of the season is the finale at Hockenheim on the 4-6th of October.