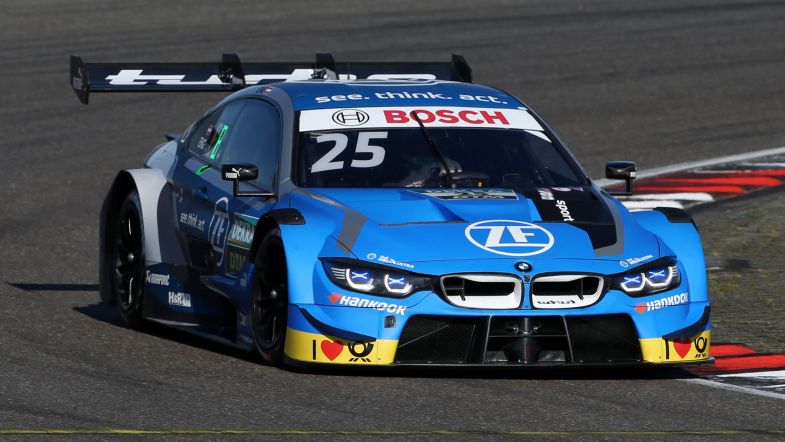 Philipp Eng: “This is the best we can do at the moment”

It was a sour Sunday for BMW Motorsport at the Nürburgring, with Team RBM’s Philipp Eng the best placed driver for the Bavarian outfit in eighth place.

Team RMG’s Marco Wittmann had to retire with an oil leak and incident in the early stages prevented his team-mate Timo Glock from achieving a good result.

Eng started from eleventh on the grid and fought some hard battles in the pack to climb up to eighth place after gearbox issues hampered his running on Saturday.

“Of course, that is not a dream result but it’s the best we can do at the moment,” said the Austrian. “Things went better than yesterday for me. The guys turned the car around completely. At least that did pay off a bit.”

Team RBM’s Sheldon van der Linde hit and spun Glock in the early stages of the race, with the Team RMG driver only able to finish ninth. Glock vowed to have a better end to the season in three weeks’ time.

“Finishing ninth after this race shows that it could have been possible to record a better result today, but that wasn’t possible after the incident on lap two,” he said. “At Hockenheim, I will now do everything I can to finish this difficult season with a good result.”

Wittmann was running in sixth and with a good tyre strategy when an oil leak caused the Team RMG engineers to retire the car as a precautionary measure. For the 29-year-old it was a bitter end for an special anniversary.

“I was focusing more on the second stint as I knew that we would then have had fresher tyres,” explained Wittmann. “The technical issue at the end was very disappointing, especially as this was my 100th race for BMW team RMG.”

Motorsport director Jens Marquardt was very critical of the outfit’s performance during the weekend: “After a good team result yesterday, today’s race performance really was unsatisfactory – from the unnecessary collision between Sheldon and Timo to Marco’s retirement.

“Finishing eighth, ninth and tenth in the race is not enough. We must prepare perfectly for Hockenheim, as we want to round off the season with a good result.”