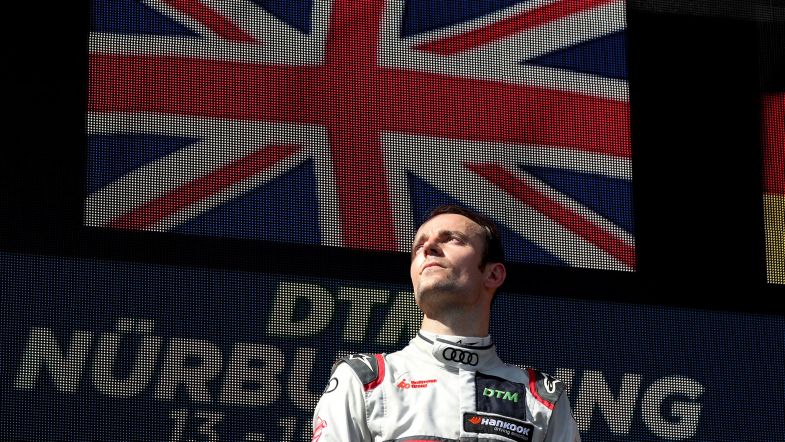 Jamie Green: “I couldn’t rest in the entire race”

Audi Sport Team Rosberg driver Jamie Green was ecstatic and relieved after taking hard-fought victory on Sunday at the Nürburgring to end a two-year spell without visiting the top spot of the podium.

“I think ‘At last!’ is the right slogan really, I think the last time I won was in the end of ’17, so it’s almost two years, it’s a long time, the least is to appreciate it when you get it,” said Green after the race. “It was such a hard race with Robin (Frijns)at the end so yes, I had to work hard for that one.”

Green beat team-mate René Rast by just 0.001 seconds to start from the pole position of the race, but Rast got ahead at the start.

After a few laps, the Team Rosberg drivers were able to open a gap over Team Phoenix’s Mike Rockenfeller, with Green feeling he could beat his team-mate.

“I was pretty chilled,” said Green. “I had a good start but René had a slightly better one. I wasn’t annoyed because I didn’t make a bad start.

“The race settled down and René and I seemed to pull away from Mike very easily. I felt that I was a bit quicker than René, and then it got a bit complicated because if I dived in and we crashed then I’d look like an idiot.”

Rast pitted at the end of lap 12, which caught Green by surprise, with the Briton mirroring the move a lap later. Green was able to undercut Rast to take the effective lead of the race.

“I was a bit surprised that he pitted so early, so we all pitted early and that’s why I was under a bit of pressure at the end,” explained the Briton, who came under fire from Team Abt Sportsline’s Robin Frijns in the closing stages. “I couldn’t rest, not for one lap could I rest.”