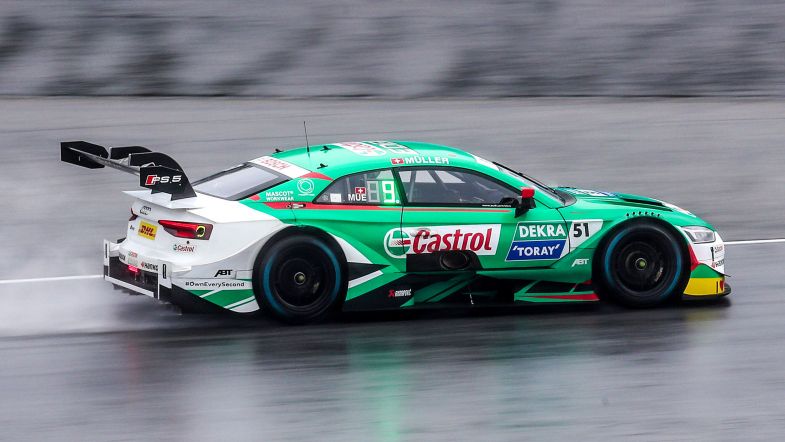 Team Phoenix driver Mike Rockenfeller set the fastest lap time the final DTM qualifying session of 2019 at Hockenheim. However, after receiving his third warning of the season during the race yesterday, he has been given a five-place grid drop for this afternoon’s race. Team Abt Sportsline driver Nico Müller inherits the pole position.

The qualifying session took place on a wet track as rainfall increased over the Hockenheimring as the session start approached. The entire field took to the track on wet tyres.

The conditions proved tricky, with Audi’s René Rast and Robin Frijns going off track briefly at the beginning of the session, but managed to recover without damage. Jenson button, driving the Super GT Honda NSX-GT, and Ronnie Quintarelli, driving the Nissan GT-R, both struggled for grip on the Hankook tyres and were well down the order.

Müller rose to the top of the classification before the session’s mid-point, with R-Motosport’s Paul di Resta going wide at the Sachs turn, causing a yellow flag with five minutes to the end of the session.

Müller continued improving his lap times, setting a best time of 1:50.813, but was beaten by Rockenfeller by just 0.013 seconds. Rockenfeller will start sixth due to the penalty.

Eriksson was fifth, followed by Wittmann and Eng, with Rast in eighth place, a full second off the pace. Frijns qualified in ninth, with Team Phoenix’s Loïc Duval completing the top ten.

Jake Dennis was the best placed driver for R-Motorsport in eleventh position, 1.4 seconds behind Müller.

As expected, the drivers from the Super GT struggled for tyre grip in wet conditions with Nick Cassidy, driving the Lexus LC500, the fastest among the Japanese drivers in 16th place, 1.7 seconds off the pace.