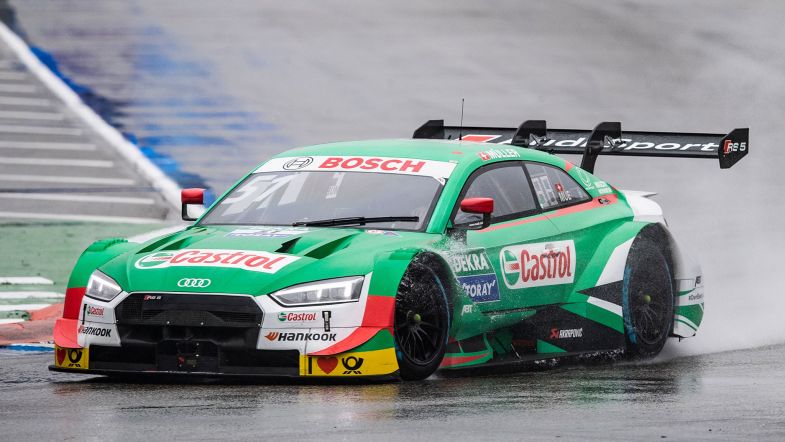 Audi Sport Team Abt Sportsline’s Nico Müller scored his third victory of the season in the final DTM race of the year at Hockenheim, a race that was interrupted by a red flag.

WRT’s Pietro Fittipaldi was excluded from the qualifying results for breaking the parc fermé after the qualifying session and had to start the race from the back of the grid.

The total race duration was reduced to 49 minutes plus one lap due to the weather conditions and the race director ordered two formation laps.

R-Motorsport’s Paul di Resta was the first retirement, parking his Aston Martin Vantage DTM during the first formation lap due to a technical issue.

Lexus Team KeePer Tom’s driver Nick Cassidy was tagged and sent into a spin by WRT’s Jonathan Aberdein, with the Lexus hitting the barriers and the safety car coming into action. But the race had to be red flagged as Daniel Juncadella’s Aston Martin Vantage caught fire and rescue vehicles had to be dispatched on track.

The race was restarted behind the safety car after 15 minutes, with Jenson Button struggling to start up his Honda NSX-GT on the grid. But the Briton finally managed to get away and joined the back of the pack.

Müller kept the lead at the restart with Rast attacking for the lead at Turn 6 without managing to overtake. Loïc Duval went wide at Turn 11, losing a position to BMW Team RBM’s Joel Eriksson. Ronnie Quintarelli pitted the Nissan GT-R at the end of the first flying lap, with Button mirroring the move a lap later.

Rockenfeller and Wittmann pitted at the end of lap four, with the Audi driver just managing to return to the track ahead of the BMW driver. Wittmann was given a drive-through penalty for an unsafe release as he nearly clashed with Aberdein. Müller pitted a lap later, with Rast coming for fresh tyres at the end of lap seven.

Rast returned to the track ahead of Müller, who closed the gap, with both coming side-by-side at Turn 8. Rast lost control of his RS 5 DTM, going wide on the following corner, with Müller taking the virtual lead of the race.

Rast continued struggling with his fresh set of tyres, losing ground and a position further to Rockenfeller. Glock closed the gap to the champion on lap 12, with Team Abt Sportsline’s Robin Frijns also joining the pair.

Positions remained stable, with Green and Eriksson in the first two positions of the race without having completed their mandatory pit stop. The Briton was trying to get enough advantage over Müller, in third place, to pit without losing the lead of the race.

Rast finally brought his tyres up to temperature, starting to work on closing the gap to Rockenfeller with ten minutes to go.

Green pitted on the penultimate lap, with Eriksson following him into the pits.

Müller kept the lead and was unchallenged on the way to his third victory of the year, ahead of Rockenfeller and Rast. Glock managed to overtake Green, who just had rejoined the track, for fourth at Turn 7.

Button was again the best placed car from the Japanese Super GT in 16th place, with Quintarelli right behind in 17th.

Rast finished the 2019 season on 324 points, with Müller 74 points behind in second and Wittmann 101 points adrift in third.