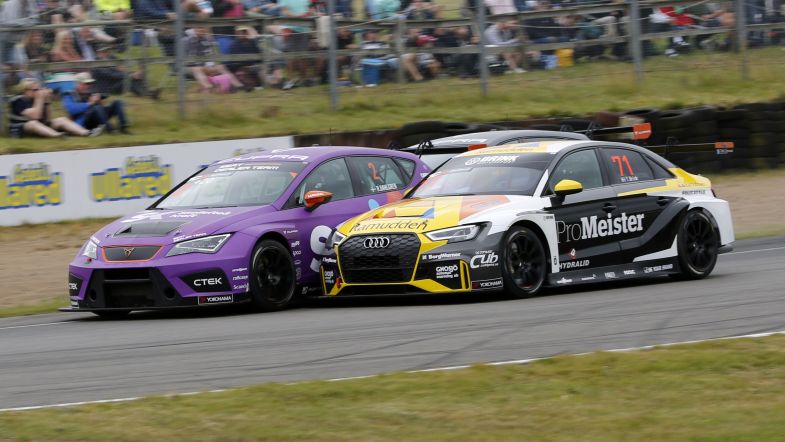 Brink Motorsport was involved in a tough fight for the TCR Scandinavia championship titles at Mantorp Park last weekend as the 2019 season came to a close.

Team owner Ted Brink stated that PWR Racing’s claim of a 80kg difference between the cars of the two teams is not accurate.

“The fact that PWR is putting lots of focus on the BoP and the weights is just evidence of how competitive we are,” Brink told TouringCarTimes.

Brink Motorsport’s Ted Brink however states that it is not possible to reach the minimum weight with the Audi.

“It was stated that there was an 80kg difference, in fact it is impossible to come down to the minimum weight with the Audi,” he said. “It means that Tobias and Haglöf were more or less was equal in weight during the weekend, with Dahlgren about 20kg heavier.”

Brink Motorsport’s title candidate Tobias Brink retired from the last race after in an incident with PWR Racing team co-owner and driver Daniel Haglöf, who made a one-off appearance for the season finale.

After the dust had settled, Dahlgren claimed the title on 252 points with Tobias Brink 29 points behind, although Brink Motorsport was able to clinch the teams’ title, 29 points ahead of PWR Racing.

“The reasons for our general improvement over the season are many,” Brink continued. “The whole team is working as one unit, we have a great atmosphere in the team and the people are 100% committed to do everything they can to put the quickest car on the grid.

“(Engineer) Ronnie Bergström and Andreas Wernersson have strengthened the team and with joint forces with the development done by myself and Tobias (Brink) have lead to a strong package. To sum up, I am really pleased with the development and we will just continue to reach for more.”