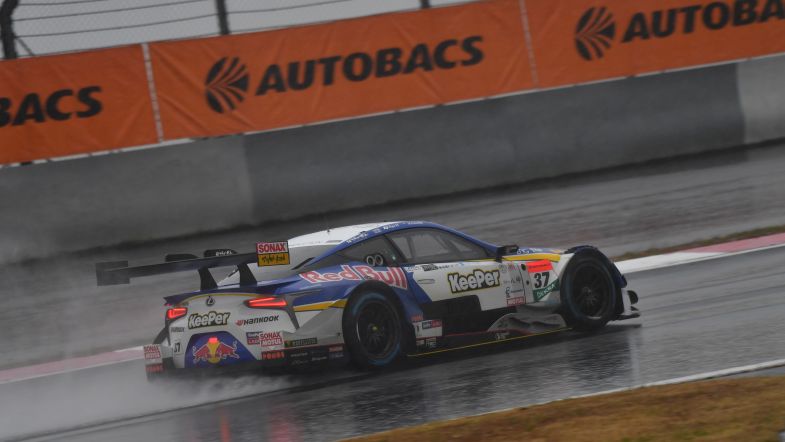 The cars took to the track on wet weather tyres as it had been raining prior to the session, with damp patches around the circuit. Rain started falling again over Fuji five minutes into the session, with the entire field on the wet Hankook control tyre.

Cassidy quickly rose to the top with Duval in second place. Kamui Kobayashi, with the BMW M4 DTM from Team RBM, was investigated for alleged blocking, with no further action taken against the Japanese driver.

The final moments of the session saw plenty of action as the field tried to improve their lap times. René Rast, driving an Audi RS 5 DTM from Team Rosberg, locked his brakes as he tried to improve from 13th position.

Mike Rockenfeller of Abt Sportsline produced a fast lap to climb up to fourth position, still seven-tenths off Cassidy’s pace.

Cassidy managed to stay ahead with a best lap time of 1:41.827, with Duval in second place 0.331 seconds off the pace. Naoki Yamamoto, driving a Honda NSX-GT from Team Kunimitsu, was third, a further five-hundredths behind Cassidy.

Ronnie Quintarelli was fastest of the Nissan GT-R drivers to fourth place, followed by Rockenfeller and Koudai Tsukakoshi, driving a Honda NSX-GT.

Jann Mardenbough finished in seventh place behind the wheel of his Nissan GT-R, nine-tenths off the pace, followed by fellow Nissan driver Fredric Makowiecki.

The session was dismal for the BMW Motorsport drivers, with Kamui Kobayashi the fastest among them in 18th place, 1.8 seconds off the pace, with Marco Wittmann immediately behind.

Cassidy, who crashed out of the DYM Hockenheim season finale on the first lap, said after the session: “Hockenheim didn’t go to plan for us. This race is a bit of fun for us but, after Hockenheim, I wanted to show a good performance, so I’m really happy.”

Rockenfeller added: “When you come in the top five in qualifying everything is possible. But the field is super competitive.”