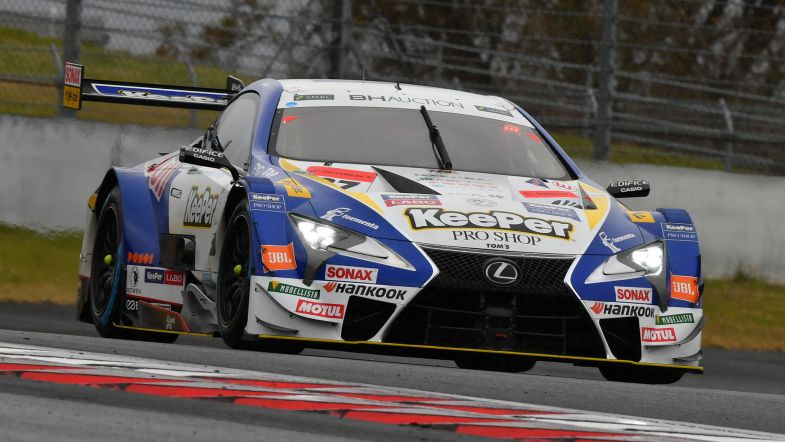 Nick Cassidy, driving a Lexus LC500, was unstoppable in the first Fuji race of the joint Super GT and DTM weekend to take the win. Benoît Tréluyer, driving an Audi RS 5 DTM, was the best placed DTM in sixth position.

The rain had stopped just before the race, with Audi Sport opting for all RS 5 DTMs to start on slick tyres. The first drama came before the green light as Team Phoenix’s Loïc Duval, who had qualified in second place on the grid, hit the barriers on his way to his grid position, with his Audi RS 5 DTM sustaining severe damage. The Frenchman had to withdraw from the race.

Alessandro Zanardi had technical issues in his BMW M4 DTM of Team RBM, having to start from the pits.

Nick Cassidy took the lead at the rolling start, followed by Ronnie Quintarelli in the Nissan GT-R and Naoki Yamamoto, with the Honda NSX-GT.

Yuichi Nakayama, driving a Lexus LC500, joined the group, attacking Rast, and overtook him for seventh place on lap 12.

Rast started losing ground and pitted a lap later. Quintarelli, who had started on wet tyres, fell down the order and pitted for slicks on the same lap.

Zanardi continued to suffer from technical problems, retiring from the race on lap 17 with a transmission issue. Cassidy continued at the front, with Nakayama in second place and Tachikawa in third place. The leader pitted at the end of lap 20.

After everyone had completed their compulsory pit stops, Cassidy was in the lead, followed by Tsukakoshi and Yamamoto, with Rast in sixth position. The Audi driver, however, fell victim to the Super GT cars’ superior speed, with Tachikawa overtaking the German driver on lap 22, with Nakayama also going past a lap later.

Kobayashi was the best-placed BMW driver in 13th position, but came under attack from Team Abt Sportsline’s Mike Rockenfeller, with the 2013 DTM champion overtaking on lap 23. Kobayashi tried to fight back by taking the tow on the straight, but Rockenfeller prevailed.

Meanwhile, Marco Wittmann was having problems with his second set of tyres, coming for a second pit stop on lap 24, dropping to the last position of the running cars. Quintarelli gradually closed the gap to Rast, overtaking the Audi driver at Turn 1 on lap 29.

Daiki Sasaki stopped his Nissan GT-R on the main straight with a technical issue, with the safety car deployed to ensure a safe recovery, a blow to Cassidy, who had built a nearly nine-second gap at the lead. Zanardi returned to the track for an installation lap, before returning to the pits to retire.

The race was restarted after three laps with an Indy-style restart, with Cassidy keeping the lead. Rockenfeller spun at the chicane after contact with one of the Super GT entries.

Cassidy took the victory at the chequered flag, with Tsukakoshi and Yamamoto completing the podium.

Yamashita was fourth, followed by Sho Tsuboi, driving a Lexus LC500, and Tréluyer. Sekiguchi finished seventh, with Rast immediately behind.

Lexus driver Yuji Tachikawa finished ninth, with Hideki Mutoh, who completed an extraordinary comeback from the back of the grid after a heavy crash in free practice, rounding off the top ten.

The field will return to action on Sunday for the qualifying session for Race 2, scheduled for 09:00 local time, 01:00 CET.