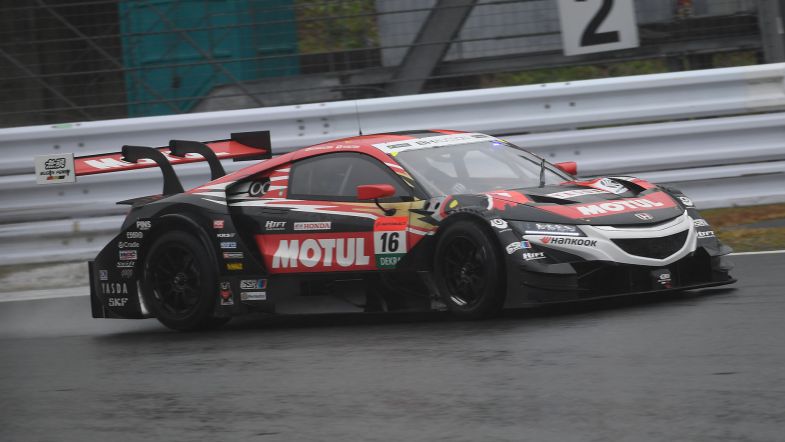 Team Mugen’s Daisuke Nakajima, at the wheel of a Honda NSX-GT, claimed the pole position for this afternoon’s Race 2 at Fuji, the second and final one of the first joint event between the DTM and the Japanese Super GT.

The weather conditions continued to prove difficult for the field, with an early morning fog turning into a light drizzle that obliged the drivers to venture out on wet tyres.

Tsugio Matsuda, driving a Nissan GT-R, was an early pace setter, but Naoki Yamamoto soon rose to the top with the Honda NSX-GT of Team Kunimitsu.

Koudai Tsukakoshi, driving a Honda NSX-GT, went up to second place as the field mounted fresh wet tyres for the final battle for the pole position.

Nakajima stole the top spot with less than a minute left on the clock, but Team Phoenix’s Loïc Duval, driving a repaired car after yesterday’s shunt, went up to first position, only to be beaten again by Nakajima on the Japanese’s last attempt, recording a lap time of 1:46.696, 0.244 seconds faster than the Frenchman.

Narain Karthikeyan qualified in third place with his Honda NSX-GT, followed by Yamamoto and Rast. Tsukakoshi finished seventh, six-tenths off the pace, just ahead of Wittmann.

Rockefeller was eighth, seven-tenths off the pace, with Lexus drivers Ryo Hirakawa, and Hiroaki Ishiura completing the top ten.