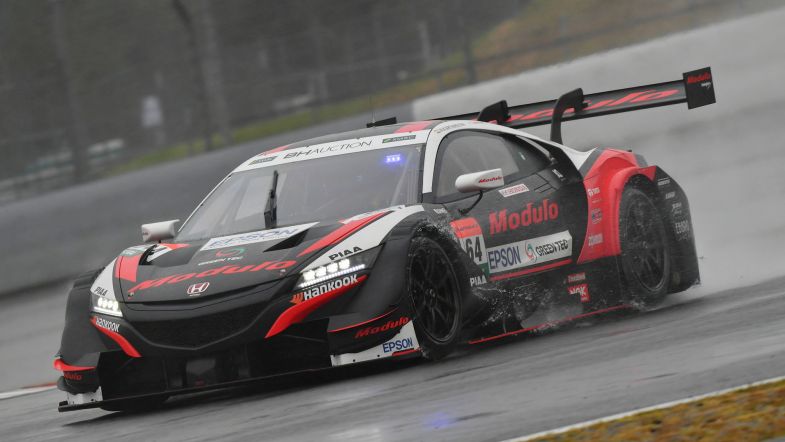 The conditions remained stable as the field prepared for the start of the race on slick tyres. However, there wasn’t any assurance that the race would remain dry, as dark clouds formed over Fuji.

Duval started from the pole position with Karthikeyan alongside as the fastest driver of qualifying, Daisuke Nakajima, got a five-place grid drop due to a chassis change on Friday.

At the start, Duval took the lead ahead of Karthikeyan and Naoki Yamamoto, driving a Honda NSX-GT from Team Kunimitsu. Audi Sport Team Rosberg’s René Rast made progress to climb up to fourth position on the opening lap.

Karthikeyan overtook Duval for the lead on the second lap, as Rast fell victim to Daisuke Nakajima and Koudai Tsukakoshi. Duval also lost out to Yamamoto and Nakajima on the following lap, with the Honda NSX-GT drivers showing a superior pace on the dry track.

Kamui Kobayashi, driving a BMW M4 DTM, and Mike Rockenfeller, driving an Audi RS 5 DTM, had a scrap for tenth place, with the Japanese driver getting ahead on lap six. Rockenfeller, however, was able to recover the position not long after.

Duval was the first to pit at the end of lap seven as the Frenchman suffered a left rear puncture.

The safety car had to be called into action at the beginning of lap nine as debris from Duval’s puncture were on the track. BMW driver Alessandro Zanardi took advantage of this to perform his obligatory pit stop, with WRT’s Benoît Tréluyer following suit a lap later.

The safety car withdrew after three laps on track, with Karthikeyan retaining the lead as he, Tsukakoshi and Yamamoto came side-by-side at Turn 1.

BMW Motorsport driver Marco Wittmann started to recover positions, fighting with Rast for fifth place. Wittmann got ahead of the DTM champion at Turn 1 on lap 12, with Rast also falling victim to Tomoki Nojiri, driving a Honda NSX-GT. Both Wittmann and Rast pitted at the end of lap 13. 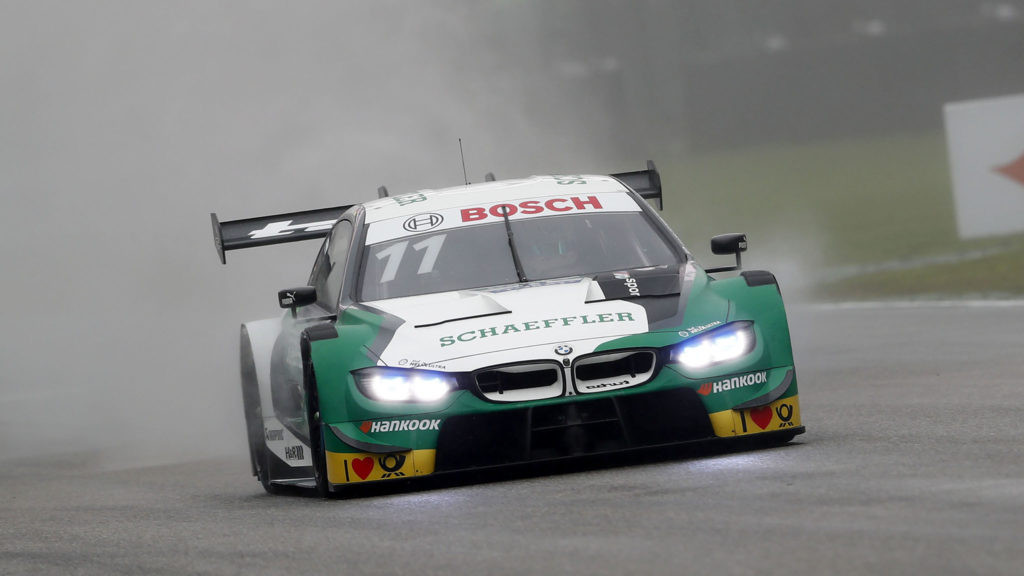 Yamamoto was the first from the leading group to perform his obligatory pit stop, doing so at the end of lap 14, with Rockenfeller also following suit. Leaders Tsukakoshi and Karthikeyan pitted a lap later, leaving Daisuke Nakajima in the lead of the race.

Karthikeyan returned to the track ahead of Tsukakoshi, with Nakajima pitting a lap later, leaving WRT driver Tréluyer in the race lead.

Drama ensued for Rast as his left rear tyre exploded on the main straight, ripping part of the bodywork, forcing the DTM champion to limp for a whole lap back to the pits. The safety car was called into action for the second time as Kobayashi pitted. Yamamoto also took the opportunity to mount fresh tyres.

The race was resumed after four laps behind the safety car, with Tréluyer retaining the lead ahead of Karthikeyan, Zanardi and Wittmann.

The restart saw Tsukakoshi and Nojiri making contact, going off the track briefly.

Tréluyer and Zanardi completed their mandatory pit stops, as they had pitted under safety car conditions before.

Lexus drivers Kazuya Oshima and Yuji Kunimoto made contact while fighting for positions, spinning on track. Fellow Lexus drivers Heikki Kovalainen, Kazuki Nakajima and Hiroaki Ishiura were unable to avoid them and crashed into them and the safety car was once again deployed. Kunimoto was penalised for causing the incident, receiving a 40-second penalty after the race, dropping him to 16th place.

The race was restarted again after two laps, with the cars not taking the ‘Indy style’ formation this time, for one final lap.

Karthikeyan kept the lead ahead of Wittmann and Duval, with Yamamoto overtaking Kobayashi for fourth position. Duval and Wittmann came side-by-side for the final part of the lap.

Karthikeyan took the victory at the chequered flag ahead of Duval, who managed to prevail over Wittmann. Race control, however, handed Duval a one-second time penalty for pushing Wittmann off the track, with the BMW driver taking second place and the Frenchman in third.