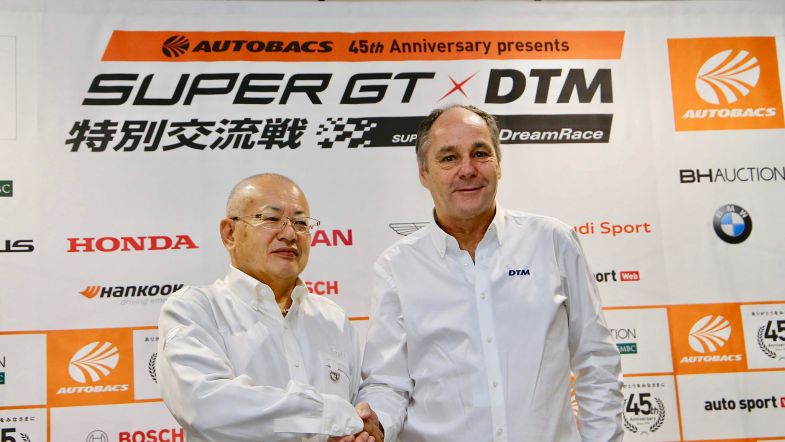 The DTM and the Japanese Super GT celebrated its first proper joint race at Fuji last weekend, with seven cars from the ITR-organised series joining 15 GT500 cars, a class which – from 2020 – will adopt the Class 1 regulations.

The weekend was deemed a success, both from an organisational point of view and also in terms of the numbers watching at the circuit, with a spectator count of nearly 52,000 visitors at Fuji during the weekend.

“When I walked out onto the Fuji grid before Saturday’s very first Dream Race, the realisation of what ourselves and GTA had achieved really struck me,” said ITR chairman Gerhard Berger. “Seeing five world-class manufacturers on the grid, understanding that we had brought two racing worlds together, after seven years’ hard work, was quite an emotional moment.”

The weekend saw the victories shared between Nick Cassidy in a Lexus LC500 and Narain Karthikeyan in a Honda NSX-GT, with the Super GT cars showing superior top speed over the DTM visitors and some interesting scraps throughout the field.

In a joint press conference between Berger and his Super GT counterpart Masaaki Bandoh, both chairmen admitted they were satisfied with the course of the weekend but that some areas of improvement for the Class 1 regulations had also been identified.

The 2020 DTM calendar has a similar structure to this year’s, leaving room for another potential joint race at the end of the year. However, there currently aren’t any concrete plans, with both Berger and Bandoh acknowledging that organising the event was difficult due to the costs and logistics involved.

But Bandoh has other ideas as to how the Class 1 joint events could pan out.

“Hockenheim and Fuji were important steps and, if there is another joint event, it could be even outside Germany or Japan, but the Class 1 regulations would have to be established in Japan first,” he said.

“There could be some winter series or a world championship race, although there aren’t any current plants. If we tried to organise something like this, we would have to talk to the FIA first. But there would also have to be more manufacturers involved.”

“I could also see that the unification of our two series is clearly the right idea for us,” added Berger. “We are heading in the right direction with this common approach.

“Of course, there’s a lot more work to do but I hope we can learn from this weekend, take our experiences home, work out how to improve, and keep continuing along this path. I see a big future in this kind of racing.”