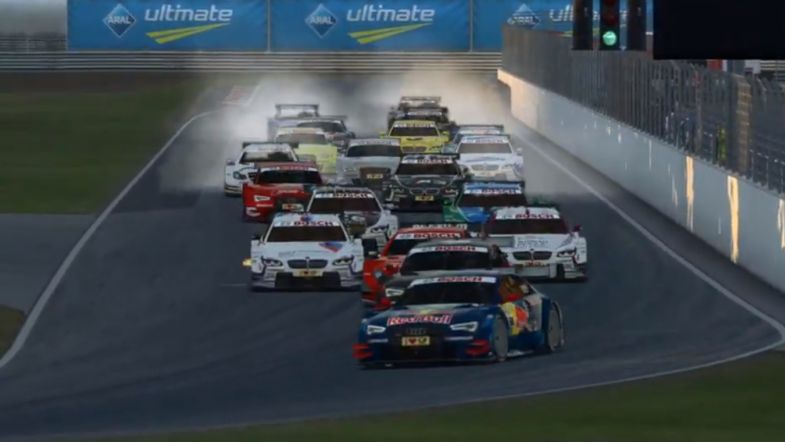 BMW Motorsport drivers Tom Blomqvist and Lucas Auer shared the victories in at the second round of the DTM Esports Classic Challenge, with the rounds held at the virtual version of Anderstorp, featuring racing cars from the 2013 DTM season.

Auer took the lead at the start, with Rast overtaking Bánki and Blomqvist to take second place. Rast attacked Auer at Turn 4, momentarily taking the lead, with the Austrian regaining the top position before the end of the lap.

The scrap between the two continued as Rast went onto the grass and lost five positions, with Blomqvist and Bánki promoted to podium positions.

Rast chased Polish driver Szymon Frelik (BMW) for fourth, with BMW’s Sheldon van der Linde close behind, but the South African made a mistake on lap three, spinning off and losing several positions.

Meanwhile, Blomqvist overtook Auer for the lead. Auer regained the lead at Turn 1 on lap five, with Blomqvist not giving up on the chase, still with half of the race to go. But Bánki was also looking for the top honours, overtaking Blomqvist for second place. Half a lap later, both drivers passed Auer, with the Slovakian taking the lead.

The leading group remained closely pack and with the positions stable despite Blomqvist going wide and over the grass with just a minute to go. Bánki made a mistake and went wide as well, falling to fourth placed behind Rast.

At the chequered flag, Blomqvist claimed his first victory of the virtual tournament, followed by Auer and Rast, with Bánki fourth in the end.

Bence Bánki made his pole position count to take the lead at the start, but it was Mercedes-AMG’s Daniel Juncadella who made the best start, jumping from fourth on the grid to second place at the second corner.

Juncadella attacked Bánki on lap two, taking the lead. The Slovakian then went wide and Rast went side-by-side with the Audi colleague, although Bánki managed to stay in front. However, the Slovakian would again go wide once again, hitting the barriers and fell to sixth place.

Juncadella went wide at Turn 1, with Rast trying to overtake. But it would be Van der Linde, together with fellow BMW driver Auer, who took advantage of the scrap between the two to take the two leading positions.

Juncadella attacked Rast, going wide again and lost two places to Race 1 winner Blomqvist and Bánki. The Spaniard went over the kerbs at Turn 8, spinning off the track and retired from the race.

Auer overtook Van der Linde for the lead, with the South African regaining the position a lap later. Blomqvist, using DRS, attacked Rast for third place, but soon had to also defend from Bánki. Blomqvist tagged Rast at Turn 8, with both overtaken by Bánki.

The scrap continued as Rast took advantage of the DRS to pass both drivers and climb up to third place. At the front, the leaders managed to open a gap, with Auer leading from Van der Linde.

The South African took the lead again with two minutes to go as Blomqvist went past Rast for third place. Van der Linde, however, went wide at the exit of Turn 1 on the last lap, with Auer again leading the race.

Auer claimed his first victory of the virtual series, followed by Van der Linde and Rast. Blomqvist was fourth, with Tuck pipping Bánki on the last lap for fifth position.

The DTM Esports Classic Challenge will be back on the 17th of May with the participants racing cars from the 2014 DTM season.