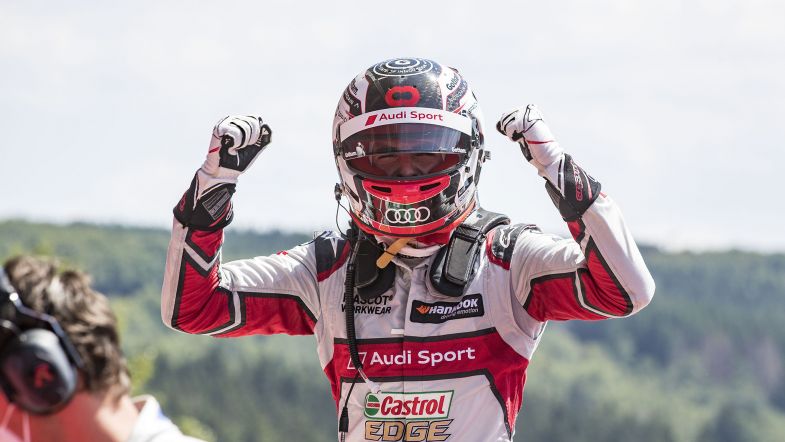 Nico Müller exultant to start the season with a strong result

Audi Sport Team Abt Sportsline driver Nico Müller achieved a near-perfect result in the first day of the 2020 DTM season after the Swiss driver qualified in second place on the front row of the grid and claimed a strong victory at Spa-Francorchamps.

The ten-month wait to get into the cockpit of his Audi RS 5 DTM was long, and Müller praised his team for the efforts made in a difficult day.

“We had a wet free practice, which didn’t give us a lot to prepare the quali, but we got a good result,” said Müller after the race. “I’m super happy, the team did a great job, there wasn’t a lot of time to work on the setup. The only thing that could have been better was to have had the fans here.”

Müller started from the second spot on the grid, but was overcome by fellow Audi driver René Rast at La Source. The pair remained side-by-side until Eau Rouge, where Rast had to give up on his attack: “Surely, I’d liked René to have lifted his foot a bit earlier, but still it was clean racing and that was good.”

A key to Saturday’s race in the sun and heat at the Ardennes was tyre degradation, which marred the race for Rast and many other drivers, Müller included. The race was free from safety car neutralisations, which also became an issue for the Swiss driver.

“One of the consequences of not having the fans here is that you don’t get the big screens, so you don’t know about how’s the classification, the gaps between the cars, and things like that, I was completely blind,” added the Team Abt Sportsline’s driver. “Additionally, we couldn’t talk to the wall, as it’s only permitted when the safety car is out, so it was difficult with no feedback with the team.

“We managed the tyres well but, still, with four-five laps to the end, I found that cliff and I was just praying that the tyres would last, because they were on the edge. So, I had to ease my pace a bit at the end.”

“It was great to score this win on the 1st of August, so I hope many folks back home enjoyed it,” he said. “With the current (COVID-19) situation I missed celebrating with my mechanics and jumping over them, and cheering with the fans.”

“Nico stood significantly above everybody else in the field,” he said. “What he did with his tyres was really outstanding.”

Müller leads the championship table with 27 points, nine ahead of fellow Audi driver Jamie Green and 12 over Loïc Duval. Audi Sport leads the manufacturers’ standings with 76 points, 57 ahead of BMW Motorsport.