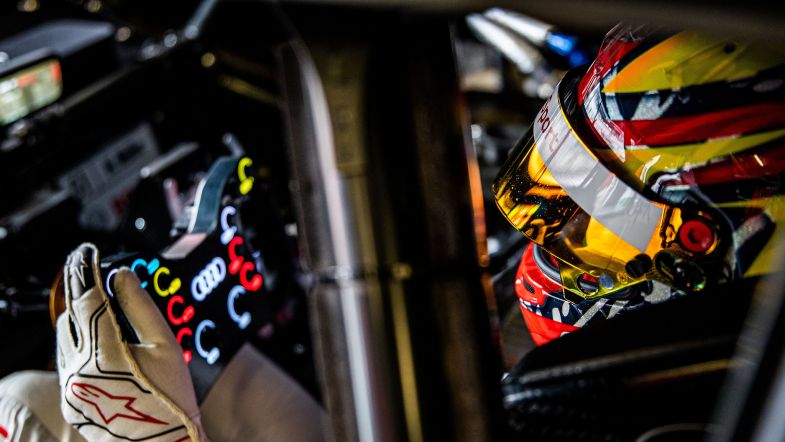 Audi Sport Team Abt Sportsline driver Robin Frijns claimed pole position for the DTM season opener at Spa-Francorchamos after a frantic qualifying session in which the Ingolstadt-based manufacturer took the top four spots of the grid.

The 20-minute qualifying session kicked off on an almost dry track, with the entire field venturing on the tarmac with slick tyres, slashing Saturday morning’s free practice lap times by 16 seconds on their first run.

Audi Sport locked out the top-five positions early on, with Nico Müller leading Loïc Duval, René Rast, Mike Rockenfeller and Jamie Green, as the session entered the half-way recess before the final fight for the pole position.

The entire field returned to the track with five and a half minutes to go as a timid sun shone over Spa-Francorchamps.

Duval, Green and WRT’s Fabio Scherer had lap times deleted for not respecting the track limits at different points of the circuit.

Reigning champion René Rast opened the hostilities, going fastest with a lap time of 2:05.889, with fellow Audi driver Mike Rockenfeller in second place just a tenth behind. But Team Abt Sportsline’s Nico Müller beat Rast, only to be improved by team-mate Robin Frijns, who went fastest with a time of 2:05.625 despite a bad first sector.

Drivers couldn’t improve on their final run, with Müller second 0.118 seconds behind his team-mate and Rast in third, 0.264 seconds off the pace. Mike Rockenfeller completed the top-four for Audi, 0.375 seconds behind Frijns.

Sheldon van der Linde was the best driver for BMW Motorsport in fifth, six-tenths off the pace, followed by Team RMG’s Timo Glock.

Fabio Scherer was the fastest driver for WRT in twelfth place, 1.9 seconds behind Frijns, with ART Grand Prix’s Robert Kubica in 14th, 2.2 seconds off the pace.

Frijns said after the practice: “It’s really good to be here. We had a lot of time ot prepare ourselves for the first race and find the week spots from last year. So I’m really happy I’ve finally managed to put it on pole position.”

The start of Race 1 is scheduled for Saturday at 13:30 CEST.